11 February 2014
United Nations-sponsored talks between the Syrian Government and opposition that resumed yesterday are making scant progress in ending the “nightmare” of the civil war, the top mediator said today, calling for a quicker pace as officials voiced “deep concern” at the detention by the authorities of men and boys leaving a long besieged city.

“The beginning of this week is as laborious as it was in the first week [of the talks]…I’m urging everybody to speed up,” UN-Arab League Joint Special Representative Lakhdar Brahimi told a news briefing in Geneva of the latest diplomatic push to end a war which has killed well over 100,000 people and driven nearly 9 million others from their homes since the conflict erupted between President Bashar al-Assad and various groups seeking his ouster nearly three years ago.

“We are not making much progress,” he said of the talks, which seek to implement the 2012 Geneva Communiqué, the first international conference on the conflict, calling for a transitional government to lead to free and fair elections, as well as to gain humanitarian access to 250,000 people who have been under siege of months or years without any aid and millions of others who have suffered the horrors of the war.

In just one example of the atrocities committed in the war, Secretary-General Ban Ki-moon today voiced “great shock” at the reported massacre of dozens of civilians on Sunday in the village of Ma’an and called for the perpetrators of this and all other crimes to be brought to justice. “Such horrific incidents should be a reminder to all of the urgency of ending the conflict and launching a political transition towards a new Syria,” he said in a statement.

Meanwhile, Mr. Brahimi said the three-day “humanitarian pause,” the first of its kind, allowing people out and aid into the Old City of Homs, where 2,500 Syrians have been trapped without succor for nearly two years in what has become an iconic symbol of the suffering endured by civilians in the war’s relentless bombardments and sieges, “can be called a success.”

But he noted pointedly that it took six months to reach the accord, which has been extended for a further three days. “Six long months, to get a couple of hundred people - no a little bit more than that - about 800 people out, and a little bit of food in,” he added. “And there are lots of other places that are besieged, where nothing has happened.”

He highlighted the risks involved in the Homs operation in which aid workers and convoys were deliberately targeted by sniper and other fire that killed 11 civilians and almost completely destroyed the car of the UN country representative while he and colleagues were in it.

“We all owe it to the Syrian people, to move a little bit faster than we are doing,” Mr. Brahimi stressed, adding that he will hold a tri-lateral meeting with Russian Deputy Foreign Minister Gennady Gatilov and United States Under-Secretary of State Wendy Sherman – representing the two countries which initiated the Geneva talks – on Friday.

“The people of Syria are thinking: ‘Please, get something going that will stop this nightmare and this injustice that is inflicted on the Syrian people.’”

UN agencies said 1,151 people have so far been evacuated from Homs Old City, reporting starvation conditions, with the UN human rights office voicing deep concern at the detention of 336 men and boys and warning that torture and mistreatment is a war crime.

Under the “humanitarian pause” women, children and the elderly were allowed to leave but not men over 15 and under 54 years of age. The 336 people detained, apparently not wishing to abandon their families, are in this latter category and were detained by Syrian authorities in a school on the outskirts where UN officials are present but do not attend interrogation sessions, with 41 being released today.

“It is essential that they do not come to any harm, and along with our colleagues in other UN organizations, we will continue to press for their proper treatment according to the international humanitarian and human rights law,” UN Office of the High Commissioner for Human Rights (OHCHR) spokesperson Rupert Colville told a news briefing in Geneva.

He stressed that prohibited acts under the Geneva Conventions include “violence to life and person, in particular murder of all kinds, mutilation, cruel treatment and torture, taking of hostages, and outrages upon personal dignity, in particular humiliating and degrading treatment,” including against members of armed forces who have laid down their arms or have been placed ‘hors de combat’ by sickness, wounds or detention.

Deploring the “disgraceful” fire targeting UN and Syrian Arab Red Crescent aid workers delivering food and medical aid to Homs on Sunday, he warned: “It is a war crime to deliberately fire on those carrying out humanitarian operations.”

UN World Food Programme (WFP) spokesperson Elisabeth Byrs told the briefing that evacuees from Homs are very weak with obvious signs of malnutrition. One man said he had survived for one week on one spoon of bulgur, while other reported eating leaves, grass, olives, and sometimes wheat flour, with the small remaining amounts of bulgur infested by insects.

She said that in January WFP dispatched enough food for 3.7 million people, leaving half a million people without any food aid due to deteriorating security. The agency, which needs to raise about $40 million every week to meet the food needs of people affected by the conflict, faces a serious shortfall and must raise $273 million to cover needs until the end of March in “a hand-to-mouth operation which requires immediate contributions.”

In an interview with UN Radio from Homs, UN Children’s Fund (UNICEF) representative Youssouf Abdel-Jelil said children coming out of the Old City “look terrified, frail and emaciated. In general, there are issues of malnutrition and also a need for vaccination for children.” UNICEF reported that evacuees say the same things about the conditions they have left: extreme cold, hunger, dirty water and constant shelling.

UN World Health Organization (WHO) spokesperson Fadela Chaib an aid convoy brought in agency medicines to treat chronic and infectious diseases to cover nearly 2,000 people for three months, as well as vaccines for polio and others diseases to cover 1,000 children. Many people were suffering from diseases including skin diseases for lack of water and sanitation, she added.

UN refugee agency (UNHCR) is trying to ensure that all civilians who want to can leave Homs and is doing its “very best under the most complicated and dangerous circumstances imaginable” to ensure that as many lives can be saved as possible, spokesperson Melissa Fleming said.

More than 20,000 Syrian refugees have arrived in Turkey since the start of the year in the biggest influx since early 2013, with than 500 people, sometimes as many as 1,000 to 2,000, recently arriving every day across official crossing points, she added. 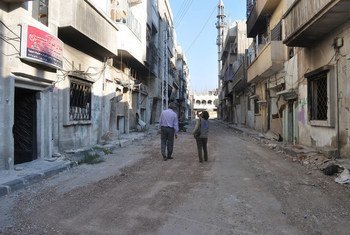 10 February 2014
United Nations-sponsored talks between the Syrian Government and opposition resumed today, 10 days after a first round ended with little progress, in efforts to end the civil war, as an already- violated ceasefire to allow humanitarian access to a city cut off by siege for nearly two years was extended for another three days.