11 February 2014
Secretary-General Ban Ki-moonand the Security Council today warmly welcomed the re-launching of negotiations aimed at reaching a comprehensive settlement of the Cyprus problem and pledged the commitment of the United Nations to these efforts.

Secretary-General Ban Ki-moon and the Security Council today warmly welcomed the re-launching of negotiations aimed at reaching a comprehensive settlement of the Cyprus problem and pledged the commitment of the United Nations to these efforts.

Mr. Ban, in a statement issued in New York, welcomed the finalization of a joint communiqué and a formal re-launch of the talks by Greek Cypriot leader Nicos Anastasiades and Turkish Cypriot leader Dervis Eroglu, who met today at the UN Protected Area in the capital, Nicosia.

“I commend the leaders for their commitment to resuming negotiations and for their hard work in the past months to reach what is an important statement of shared principles and invaluable basis for renewed talks,” said the Secretary-General.

“The United Nations will continue to support the Greek Cypriots and Turkish Cypriots in their efforts to reunify the island and move on from decades of separation. I personally pledge our resolute commitment to these efforts.”

Mr. Ban also recognized the “indispensable” role played up to this point by his Special Adviser on Cyprus, Alexander Downer.

Mr. Downer, who was appointed in September 2008, has informed the Secretary-General that now that the joint communiqué has been achieved, he has decided to take up a new position and step down as Special Adviser.

In a press statement issued later in the day, the Security Council echoed many of the UN chief’s sentiments and expressed hope that the Greek Cypriot and Turkish Cypriot leaders will take advantage of the opportunity “to reach a comprehensive settlement based on a bicommunal, bizonal federation with political equality,” as set out in the relevant Council resolutions.

“The Security Council reiterates its full support for the process and underlines the benefits that reunification will bring to the island, the members of the 15-nation body said, adding that they look forward to substantive progress in the negotiations as soon as possible.

Finally, the Council expressed deep appreciation at the perseverance and commitment of Mr. Downer, since September 2008, and wished him well in his future endeavours.

The UN has deployed a peacekeeping force in Cyprus, known as UNFICYP, since 1964, when inter-communal fighting erupted on the Mediterranean island. 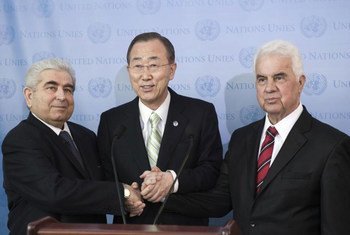 Cyprus: not enough progress in talks to call for international conference – Ban