10 February 2014
United Nations-sponsored talks between the Syrian Government and opposition resumed today, 10 days after a first round ended with little progress, in efforts to end the civil war, as an already- violated ceasefire to allow humanitarian access to a city cut off by siege for nearly two years was extended for another three days.

UN-Arab League Joint Special Representative Lakhdar Brahimi met negotiators from both sides in Geneva to discuss the agenda of the second round of talks, centring on an end to violence and terrorism and the establishment of a transitional governing body.

The basis of the talks is full implementation of an action plan adopted in the so-called Geneva Communiqué of 2012, the first international conference on the conflict, calling for a transitional government to lead to free and fair elections to end a war in which well over 100,000 people have been killed and nearly 9 million others driven from their homes since the conflict erupted between President Bashar al-Assad and various groups seeking his ouster nearly three years ago.

But a major issue of the first round, which ended on 31 January with Mr. Brahimi reporting “no progress, to speak of,” was access to humanitarian aid for 1.6 million Syrians, some of whom have been trapped for almost two years without regular food supplies.

Some progress emerged last week when agreement was reached on a three-day ceasefire to allow people out and aid into the Old City of Homs, where 2,500 Syrians have been trapped without succor for nearly two years in what has become an iconic symbol of the suffering endured by civilians in the war’s relentless bombardments and sieges.

But the “humanitarian pause” had barely begun with the evacuation of 83 people on Friday when sniper and other fire temporarily interrupted the process. This continued throughout the weekend, deliberately targeting UN and Syrian Red Crescent workers and leading to the deaths of 11 people even as more than 800 people were eventually evacuated from the Old City and some vital food and medical supplies made their way in.

“It is absolutely unacceptable that UN and Syrian Arab Red Crescent aid workers were deliberately targeted,” UN Emergency Relief Coordinator Valerie Amos said in a statement today, while welcoming the three-day extension. “The international community must press for full accountability of the Syrian Government and Opposition forces and demand that the ceasefire is held so that all who want to leave can do so safely...”

“The protection of civilians caught up in this horrendous conflict in Syria is the greatest priority for UN agencies and humanitarian partners,” she added, highlighting the “extremely dangerous circumstances” in which aid workers have been operating.

Ms. Amos cited UN and Red Crescent workers as telling her that many of those who left Old Homs were traumatized and weak. “They also said that they witnessed terrible conditions at the field hospital in the Old City, where the equipment is basic, there are no medicines and people are in urgent need of medical attention,” she added, stressing the right of all wounded and sick, both civilians and combatants to medical aid under international laws.

“Humanitarian pauses are vital to allowing aid to be delivered and people to leave in communities which have been blockaded for months but it is very important that they are not a one-off event. As a political solution is sought to end this crisis, I hope that those negotiating in Geneva agree to allow the sustained delivery of aid to the 250,000 people in besieged communities in Syria and all those who are in desperate need across Syria.”

In an interview with UN Radio, Khaled Erksoussi, the head of operations at the Syrian Red Crescent said that while the situation in Homs was indeed stressful for aid workers, he was focused on the plight of the thousands of people that had been trapped in the city for some 600 days of siege.

“For our teams and the UN teams, we tried to get in as much aid as we could and to evacuate the people that want to be evacuated,” he said of the hours ahead of the breakdown in the. “The ultimate solution would be that we will be allowed to bring aid and the people who want to leave will be allowed to do so,” he added.

“[Overall], access is our biggest challenge, as it is hard to negotiate among all the armed groups on the ground. There is also the issue of having enough materiel now that some of the areas are beginning to open up,” said Mr. Erksoussi.

UN World Food Programme Executive Director Ertharin Cousin today also demanded safe access to vulnerable civilians across the length and breadth of the war-wracked country. “The Old City of Homs is just one of 40 besieged communities in Syria. Altogether, a quarter of a million people have been cut off from humanitarian aid for months,” she said, calling on all sides to guarantee the safety of aid workers trying to help innocent victims.

“Hundreds of women, children, the sick and elderly people have been evacuated after suffering for nearly two years and barely surviving. We acknowledge this is a step toward easing the siege. But one-off convoys into besieged areas offer only a minimum of relief. WFP demands continuous and sustainable access to provide food and to monitor and assess needs.”

The agency and its partners are already feeding nearly 4.25 million people across Syria, she noted, adding: “We urgently need funding to help them in what is WFP’s largest, most complex and costly global emergency.”

Meanwhile, food distribution to another flashpoint in the crisis, a Palestinian refugee camp in the Damascus suburb of Yarmouk where overall, 100,000 people are trapped and in severe risk of starvation, was interrupted over the weekend due to security concerns.

The UN Relief and Works Agency for Palestine Refugees in the Near East (UNRWA) reported that the authorities advised that its food distribution for 18,000 Palestinians besieged for months should not continue until the area was secured.

“There is an urgent imperative for a rapid resumption given the massive humanitarian needs of civilians that are yet to be addressed, the thousands of desperate civilians still to be served, and the fact that those who received UNRWA food parcels in the early part of the distribution have already run out of supplies and must be served again,” UNRWA Spokesperson Chris Gunness said.

“We again call on all parties immediately to take steps to bring about an environment which allows secure, substantial and permanent humanitarian access in Yarmouk and elsewhere." 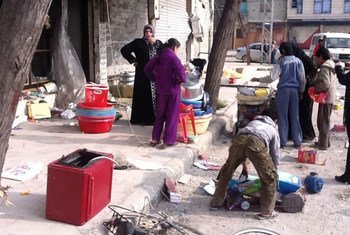 7 February 2014
As the first of 2,500 Syrians trapped by war in the Old City of Homs without aid for nearly two years were evacuated today under a three-day accord allowing people out and aid in, the United Nations called for immediate access to nearly 1.6 million others throughout the country who have been without regular food or medical supplies for many months.