General Assembly President John Ashe today launched a major effort to harness the support of all 193 United Nations Member States and civil society to formulate a new development agenda with the potential to guide the course of humankind away from poverty for decades to come.

“Like all of you, I am all too aware of the enormous challenges facing our globe,” he told an interactive briefing of global civil society representatives from UN Headquarters in New York. “With the 2015 deadline looming, we need to be collectively focused on building momentum for the post-2015 agenda.”

Mr. Ashe has made the effort to achieve a new post-2015 development agenda to succeed the UN Millennium Development Goals (MDGs) the hallmark of his year-long Assembly presidency which ends in September.

The MDGs, agreed by world leaders at a UN summit in 2000, aim to slash extreme hunger and poverty, cut maternal and infant mortality, combat disease and provide access to universal education and health care, all by the end of 2015. But these targets will not be reached in many countries and areas, and they will be incorporated in an even more ambitious post-2015 agenda.

“You and your various organizations are the trusted partners of the United Nations,” Mr. Ashe said. “As President of the 68th session of the General Assembly, I see no greater task or mandate for my term than to support this vital process of getting the framework and content of the post-2015 development agenda right, so that people everywhere can live in dignity and with opportunities in their societies and economies…”

“I am confident that we can all come together around one global sustainable development agenda, with poverty eradication at its centre and with true ownership from both governmental and non-governmental actors alike.”

Mr. Ashe has set six major initiatives to jumpstart progress on sustainable development after 2015. In the coming months he will convene three high-level events focused on women, youth and civil society (6-7 March); human rights and rule of law (17-18 June); and South-South cooperation, triangular cooperation and information communication technology (ICT) for development (20-21 May).

“Non-governmental organizations, the private sector, local authorities, trade unions, academics and citizens themselves have all been involved,” he said.

“I sense great dynamism in this room. Civil society groups are driving progress across the international agenda. On peace, human rights, inequalities, rule of law, climate change, poverty eradication, sustainable development and many other issues we rely also on you to push for progress among Governments – and generate action on the ground,” he added.

“We are at a crossroads on our journey to define the future development agenda. I count on you to continue advancing alongside Governments every step of the way. Civil society organizations are a source of ideas and inspiration. You are key critical development partners, agents of change, and watchdogs.”

♦ Receive daily updates directly in your inbox - Subscribe here to a topic.
♦ Download the UN News app for your iOS or Android devices.
development agenda

Task of eradicating poverty must be met 'with a sense of urgency,' says deputy UN chief 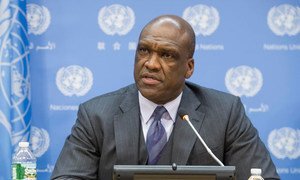 Briefing the press ahead of the opening of the 68th General Assembly later today, the body’s new President said that the United Nations is about to embark on a process with the potential to guide the course of humankind for decades to come: defining parameters for the world’s post-2015 development agenda.