“I will ask delegations to focus on the theme…the ‘Post-2015 Development Agenda: Setting the Stage’,” said John W. Ashe, addressing journalists in New York in his first press conference since assuming the role of General Assembly President.

Mr. Ashe, a national of Antigua and Barbuda, said he would convene three high-level events and three thematic debates to give the 193 UN Member States an opportunity to “flesh out ideas” on a variety of issues that he believes should be included post-2015, the deadline for achievement of the Millennium Development Goals (MDGs) .

The UN is currently in the 1,000 days of action to spur progress towards those eight anti-poverty targets, which were agreed by world leaders at a UN summit in 2000, which set specific goals on poverty alleviation, education, gender equality, child and maternal health, environmental stability, HIV/AIDS reduction, and a global partnership for development.

As the world seeks to jumpstart progress on sustainable development after 2015, Mr. Ashe said he would convene three high-level events, focused on women, youth and civil society; human rights and rule of law; and South-South cooperation, triangular cooperation and information communication technology (ICT) for development

“The intent is not to have a debate for debate’s sake… but to look at how these elements can contribute to a post-2015 agenda,” Mr. Ashe noted, during the press conference alongside his spokesperson, Afaf Konja.

The General Assembly this year will also host three thematic debates on the role of partnerships; how stable and peaceful societies can contribute to development; and on the way that water, sanitation and sustainable energy can contribute to the post-2015 development agenda.

Addressing the press, Mr. Ashe also highlighted Security Council reform, a key point on the agenda that will roll over from the previous General Assembly headed by former President, Vuk Jeremic, of Serbia.

“This has been an issue that has been with us for quite some time, more than 20 years or so,” Mr. Ashe said, adding that there are no shortages of ideas on the table. “So far, the Assembly has failed to achieve a consensus on what Security Council reform would look like. It is my intent to take up this matter with Member States and see how we can advance the discussions.”

The 68th General Assembly will open at 3pm today with speeches from Mr. Ashe, followed by Secretary-General Ban Ki-moon.

In response to questions from journalists about developments in Syria, Mr. Ashe said he expects to hear from some Member States in an informal session that will follow the opening.

He noted that Syria, as well as the entire Middle East region, is likely to be discussed by the world body over the coming weeks, but cautioned that there are limitations on what can be achieved.

“One thing that is often overlooked when speaking about the General Assembly is that it is comprised of Member States. It is only as effective as Member States want it to be,” Mr. Ashe said. 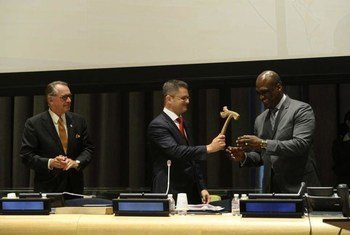 16 September 2013
General Assembly President Vuk Jeremic today called on Member States to chart a course towards a more secure and sustainable future, as he brought to a close a year-long session marked by what he termed “notable achievements” by the international community as well as its “glaring failure” to halt the tragedy in Syria.