United Nations officials today highlighted the importance of both traditional and new forms of cooperation, as well as building broad partnerships, to shaping a future development agenda that is both sustainable and leads to prosperity for millions around the world.

“The absolute size of the emerging economies and their populations and the interconnectedness of global challenges, such as climate change, suggest that the full engagement of both the North and the South is needed to pursue new development pathways which are sustainable and inclusive,” said Helen Clark, Administrator of the UN Development Programme (UNDP).

“South-South cooperation, understood as a mutually beneficial partnership based on solidarity, equality, and shared development experiences, is growing fast. Innovations and experiences from the South are often seen as the most relevant to the challenges faced by other developing countries.”

UNDP is working to strengthen South-South and triangular cooperation for the advancement of human development. An example is the agency’s facilitation of a visit by a delegation from the Ethiopian Government to Central America to acquire first-hand knowledge of sustainable agricultural practices, supply chain efficiency, and social participation in the coffee sector.

General Assembly President John Ashe said that the rising power and might of countries of the global South opens the landscape of opportunities to include new forms of development cooperation.

According to UN estimates, the share of South-South cooperation offers myriad benefits at all levels. Among them is the fact that developing countries can gain additional access to finance, technology and markets, and that South-South cooperation initiatives can lead to further national agricultural productivity, mitigate the impacts of natural disasters, combat climate change, and fight hunger and malnutrition.

“South-South and triangular cooperation can contribute to the new global development agenda by strengthening national capabilities and resilience, as well as regional networks and mechanisms,” said Mr. Ashe. “At the same time, gaining a stronger voice in global negotiations and policy-making comes naturally when voices from the South join together.”

Jan Eliasson, UN Deputy Secretary-General, said it was important to recognize that the world has dramatically transformed. “South-South and triangular cooperation is growing fast, representing a great and growing potential to contribute to sustainable development.”

South-South cooperation has proved its strength in boosting sustained economic growth; South-South trade represents over a quarter of all global trade; and thanks in part to South-South investment, foreign direct investment flows to sub-Saharan African have remained stable.

“We should acknowledge and commend this progress,” said Mr. Eliasson. “But we also recognize that despite its growing contribution, South-South contribution cannot substitute for North-South cooperation.” He added that this reality must be addressed, in particular when dealing with financing of the global development agenda beyond 2015, the deadline for the anti-poverty targets known as the Millennium Development Goals (MDGs).

The three officials also highlighted the importance of information and communication technologies (ICT), which play a transformative role for economies – from providing real-time information on weather and market prices to small farmers to driving innovation and creativity.

♦ Receive daily updates directly in your inbox - Subscribe here to a topic.
♦ Download the UN News app for your iOS or Android devices.
development agenda

Task of eradicating poverty must be met 'with a sense of urgency,' says deputy UN chief 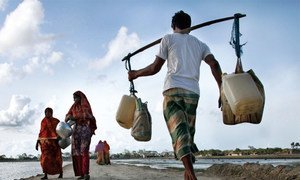