A senior United Nations relief official today called for a halt to the displacement of Palestinians in the Jordan Valley, after 66 people, including 36 children, were uprooted in the latest round of Israeli demolitions in the area.

The call by James W. Rawley, the UN Humanitarian Coordinator for the occupied Palestinian territory, comes after Israel demolished 36 Palestinian-owned structures in the community of Ein al Hilwe yesterday.

“I am deeply concerned about the ongoing displacement and dispossession of Palestinians in Area C, particularly along the Jordan Valley where the number of structures demolished more than doubled in the last year,” said Mr. Rawley. Area C represents over 60 per cent of the West Bank where Israel retains control over security, planning and building.

“This activity not only deprives Palestinians of access to shelter and basic services, it also runs counter to international law,” he added in a news release issued by the UN Office for the Coordination of Humanitarian Affairs (OCHA).

Humanitarian agencies are providing the necessary emergency assistance to families that are currently without shelter and suffering impaired livelihoods. According to OCHA, they are facing increasing difficulties responding to emergency needs in Area C due to Israeli restrictions. In several cases, humanitarian assistance has been seized, confiscated or destroyed.

The Office added that displacement rose 25 per cent in 2013, with over 1,100 uprooted in the West Bank – both in Area C and East Jerusalem – following the demolition of structures built without an Israeli-issued building permit, “which is virtually impossible to obtain.”

Since the beginning of 2014, over 100 Palestinian-owned structures have been demolished in these areas, forcibly displacing more than 180 Palestinians, including nearly 100 children. 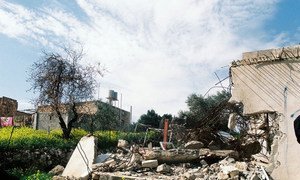 A senior United Nations humanitarian official today voiced concern as Israeli demolitions in the Jordan Valley resulted in the displacement of 41 people, including 24 children, some of whom were uprooted for the second time this month.