31 January 2014
Voicing deep concern about the growing threats and attacks on members of the media in Egypt, the United Nations human rights office today urged the authorities to investigate reports of violence against them and to promptly release all journalists imprisoned for carrying out their legitimate activities.

“We are extremely concerned about the increasingly severe clampdown and physical attacks on media in Egypt, which is hampering their ability to operate freely,” Rupert Colville, spokesperson for the Office of the High Commissioner for Human Rights (OHCHR), told reporters in Geneva.

“In recent months, there have been numerous reports of harassment, detention and prosecution of national and international journalists as well as violent attacks, including several that led to injuries to reporters trying to cover last weekend’s third anniversary of the Egyptian revolution,” he stated.

Unconfirmed reports suggest that several journalists were wounded by live fire as well as rubber bullets last Saturday, some of which may have been fired by opponents of the Government as well as by police and other Government forces.

“This accentuates the difficult and increasingly dangerous environment for journalists trying to carry out their work in the country,” said Mr. Colville.

A “significant” number of other journalists covering events related to the anniversary were detained by the authorities, although most are reported to have now been released, he said.

Mr. Colville said Wednesday’s announcement that the Egyptian Prosecutor-General intends to bring to trial 16 local and 4 foreign journalists alleged to have worked for international broadcaster Al Jazeera, on “vague” charges including ‘aiding a terrorist group’ and ‘harming the national interest’, is also of great concern.

“It has not only placed a sharp focus on the systematic targeting of Al Jazeera staff – five of whom are actually in custody – since the fall of the previous Government last July, but also led to increased fears among the media in general, both national and international, which is clearly deeply detrimental to freedom of expression and opinion,” he stated.

Journalists working for other media organizations have reported being attacked by Government supporters after being accused of working for Al Jazeera. A video has also emerged which appears to show a police officer threatening a camera crew working for another TV station that, if they did not stop filming, he would tell bystanders they worked for Al Jazeera so that they would be attacked.

“If confirmed, this lends credence to allegations that the anti-Al Jazeera campaign in Egypt is, on occasion, amounting to incitement to violence,” the spokesperson noted.

OHCHR has also received numerous reports of intimidation of journalists, who have had their equipment seized, and in some cases of local journalists who have been sacked for reporting on sensitive issues. There are also reports of journalists in detention being subjected to ill-treatment or being held in conditions that are not in line with international human rights standards.

“We urge the Egyptian authorities to promptly release all journalists imprisoned for carrying out legitimate news reporting activities in exercise of their fundamental human rights,” said Mr. Colville. “It is the State’s obligation to ensure that the right to freedom of expression is respected, and that journalists are able to report on diverse views and issues surrounding the current situation in Egypt.

“All reports of violence against journalists, including the attacks on 25 January, must be independently and transparently investigated,” he added.

Egypt has witnessed considerable violence since the overthrow of Hosni Mubarak three years ago following mass protests. Last July, renewed protests, in which dozens of people were killed and wounded, led to the military deposing President Mohamed Morsy and the setting up of an interim government. A new constitution was adopted in a referendum earlier this month. 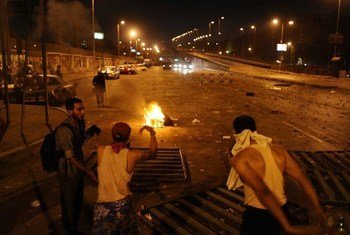 27 January 2014
The top United Nations human rights official today voiced grave concern about the escalating violence in Egypt, and called for a prompt investigation into recent incidents that have led to scores of deaths and injuries.