31 January 2014
Syrian Government and opposition delegates today wrapped up what United Nations officials hope will be just the first stage of talks to end the country’s civil war, with the chief mediator reporting no breakthrough to stop the “unspeakable suffering” of the Syrian people, including access for humanitarian aid.

“We haven’t made any progress, to speak of,” UN-Arab League Joint Special Representative Lakhdar Brahimi told a news conference in Geneva, site of the eight days of talks, noting that the opposition has agreed to return for a further session on 10 February but that the Government delegation said they needed to check back with Damascus first.

“There is absolutely no doubt that the key positions are still very wide apart,” he said of the talks, the first time Government and opposition representatives have sat down together in the UN-sponsored bid to help end nearly three years of civil war in which well over 100,000 people have been killed and nearly 9 million others driven from their homes since the conflict erupted between President Bashar al-Assad and various groups seeking his ouster.

The basis of the talks is full implementation of an action plan adopted in the so-called Geneva Communiqué of 2012, the first international conference on the conflict, which calls for a transitional government to lead to free and fair elections, but a major issue has been access to humanitarian aid for 1.6 million Syrians, some of whom have been trapped for almost two years without regular food supplies, and on this Mr. Brahimi reported virtually no progress.

“A little bit of good news came yesterday, with the delivery of humanitarian assistance to the Yarmouk camp for Palestinian refugees (near Damascus), but so much more is needed,” he said, stressing that the UN will continue humanitarian discussions with the governor of Homs and the authorities in Damascus.

Only 12 kilometres away, UN trucks are on standby to deliver urgently needed food and medicines to 500 families, some 2,500 people, trapped in the Old City of Homs without aid for almost two years, once the warring parties allow access. Overall, some 1.6 million civilians in Syria have been without regular UN World Food Programme (WFP) aid for months.

In a statement that he read before taking questions, Mr. Brahimi said he wanted to speak “almost only about the few positive elements, because we want to look to the next steps. And I sincerely think that there are some elements that can be, that can offer a beginning, and a ground to stand on, if there is political will to look for a solution,” he added, noting that this was a very modest beginning.

“It was a very difficult start. But the sides have become used to sitting in the same room. They have presented positions and listened to one another. There have been moments when one side has even acknowledged the concerns and the difficulties and the point of view of the other side. Progress is very slow indeed, but the sides have engaged in an acceptable manner. This is a very modest beginning, but it is a beginning on which we can build.”

While the gaps between the sides remain wide – “there is no use pretending otherwise” – Mr. Brahimi said he observed a little bit of common ground, including the commitment by both to discuss full implementation of the Geneva Communiqué to achieve a political solution their recognition that to do so they must agree on the permanent and comprehensive end to the conflict and the establishment of a transitional governing body.

“Both sides understand that the conflict in their country has imposed immense and unacceptable suffering on the Syrian people. Both sides recognize the urgent need to bring that violence to an end. We hope they will also redouble their efforts to seek earlier opportunities to reduce, to at least reduce, the level of violence on the ground,” he said.

“I hope that we can start to build more common ground when next we meet, in Geneva. We will now have a short break in the negotiations, to allow the sides to prepare their more detailed positions on the issues raised already, and on all other aspects of the Geneva Communiqué.”

After today’s end of the current talks, UN Under-Secretary-General for Humanitarian Affairs Valerie Amos voiced “deep frustration and disappointment” at the failure to agree on access to aid for civilians blockaded in towns and cities across Syria, noting that more than 3 million people are trapped in areas where heavy fighting continues or that are besieged by Government or opposition forces.

“I am extremely concerned that, while the discussions continue to try and find a political solution to end the crisis, ordinary men, women and children are dying needlessly across the country and others are desperate for want of food, clean water or medical care,” she said in a statement.

“The situation is totally unacceptable. The international community has clearly called for immediate action to facilitate safe and unhindered delivery of assistance across the country,” she added.

“We need urgent action now. Sieges must be lifted. Ceasefire agreements must be agreed and convoys allowed to proceed immediately and safely. Border crossings and roads need to be opened to allow the regular flow of vital aid supplies. Those who fail to protect civilians or facilitate assistance are violating international humanitarian law.”

UN Office for the Coordination of Humanitarian Affairs (OCHA) spokesperson Jens Laerke told a Geneva briefing said that with regard to Homs the “bottom line” is that the parties on the ground had not yet reached modalities for providing safe conditions for an aid delivery.

For its part, WFP voiced concern that that up to 6.5 million people inside Syria might be severely food insecure and would require food aid. It has sent food to an unprecedented 3.8 million people in December and has ramped up logistics and operational capacity to feed 4.25 million people in January, but major road closures are a challenge, spokesperson Elisabeth Byrs said. 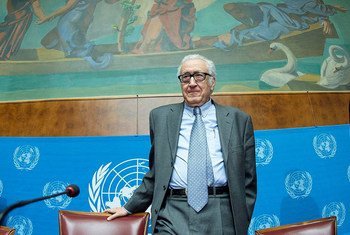 30 January 2014
After a “tense but rather promising” meeting today between representatives of the Syrian Government and the main opposition group on reaching a political end to the country’s three-year-civil war, the United Nations/Arab League mediator said that the first round of talks will end tomorrow with no serious breakthrough and no major change in the position of either side.