29 January 2014
Some 125 million school children around the world are unable to read a single sentence, even after four years of attendance – a waste of $129 billion a year – a United Nations report warned today, calling on Governments to draft the best teachers to teach the most underprivileged if the goal of universal education is ever to be reached.

“This learning crisis has costs not only for the future ambitions of children, but also for the current finances of Governments,” says the independent Education for All (EFA) Global Monitoring Report Teaching and Learning: Achieving Quality for All,commissioned by the the UN Educational, Scientific and Cultural Organization (UNESCO).

“Around 250 million children are not learning basic skills, even though half of them have spent at least four years in school. The annual cost of this failure: around 129 billion,” it says, noting that in around a third of countries, less than 75 per cent of primary school teachers are trained according to national standards. Some 57 million children are not in school at all.

“These policy changes have a cost,” UNESCO Director-General Irina Bokova says in a forword. “This is why we need to see a dramatic shift in funding. Basic education is currently underfunded by $26 billion a year, while aid is continuing to decline. At this stage, Governments simply cannot afford to reduce investment in education – nor should donors step back from their funding promises. This calls for exploring new ways to fund urgent needs.”

Noting that the world will already miss the goal of full primary schooling for children, both boys and girls, everywhere by 2015, the second of the anti-poverty Millennium Development Goals (MDGs) adopted at the UN Millennium Summit in 2000, she stresses the imperative to make education central to a sustainable development agenda for the decades after 2015.

“As we advance towards 2015 and set a new agenda to follow, all Governments must invest in education as an accelerator of inclusive development,” she writes. “This Report’s evidence clearly shows that education provides sustainability to progress against all development goals. Educate mothers, and you empower women and save children’s lives. Educate communities, and you transform societies and grow economies.”

The report notes that in 2011, around half of young children had access to pre-primary education, but in sub-Saharan Africa the share was only 18 per cent. The number of children out of school was 57 million, half of whom lived in conflict-affected countries. In sub-Saharan Africa, only 23 per cent of poor girls in rural areas were completing primary education by the end of the decade.

“If recent trends in the region continue, the richest boys will achieve universal primary completion in 2021, but the poorest girls will not catch up until 2086,” it warns.

But the disparity is not only restricted to the developing world. Even in high-income countries education systems are failing significant minorities. In New Zealand, while almost all students from rich households achieved minimum standards in grades 4 and 8, only two thirds of poor students did.

Immigrants in rich countries are also left behind. In France, for example, fewer than 60 per cent of immigrants have reached the minimum benchmark in reading.

As for adult literacy, that has hardly improved. In 2011, there were 774 million illiterate adults, a decline of just 1 per cent since 2000. The number is projected to fall only slightly, to 743 million, by 2015. Almost two thirds of illiterate adults are women. The poorest young women in developing countries may not achieve universal literacy until 2072. 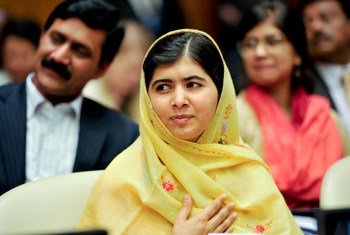 25 September 2013
Dignitaries, activists and education leaders gathered today at the United Nations in New York stressed the need for stronger leadership and financing to deliver on the pledge made a year ago to provide all children with quality education.