29 January 2014
More than 400,000 people have been displaced recently in the so-called “Triangle of Death” – the area between the towns of Pweto, Mitwaba and Manono – in the Katanga province of the Democratic Republic of the Congo (DRC), the United Nations confirmed today.

More than 600 homes in 11 villages have been destroyed since October, a dramatic increase in the last two years, according to the UN Office for the Coordination of Humanitarian Affairs (OCHA).

Secretary-General Ban Ki-moon’s Special Representative for the DRC, Martin Kobler, said today that he was “extremely concerned” by the deterioration of the humanitarian situation in the southern province.

“All armed groups must stop their activities and allow humanitarian access to the main victims of this tragedy, the civilian populations” urged Mr. Kobler, who is also the head of the UN Mission in the country (MONUSCO).

The Mission today reported that most of the attacks in the region are perpetrated by Mayi-Mayi Katanga, one of the rebel groups known to operate in the country.

Fighting in the DRC between the Government and rebels – including the M23 who were defeated by the national army with UN support last month – the Allied Democratic Forces (ADF) and others, has displaced 2.9 million people, OCHA has reported.

The DRC has been torn apart by civil wars and factional fighting since its independence in 1960, but with the support of a series of UN missions, a measure of stability has been restored to much of the vast country over the past decade.

In March, the Security Council authorized the deployment of an intervention brigade within MONUSCO, based in North Kivu province with a total of 3,069 peacekeepers, to carry out targeted offensive operations, with or without FARDC, against armed groups threatening peace in that part of the country.

Mr. Ban, his Special Envoy for the Great Lakes Region, Mary Robinson, and Mr. Kobler have stressed the importance of a political solution to address the underlying causes of violence in the region. The Peace, Security and Cooperation Framework for the DRC and the Region was signed by 11 nations last February, and has since been nicknamed the “framework of hope.” 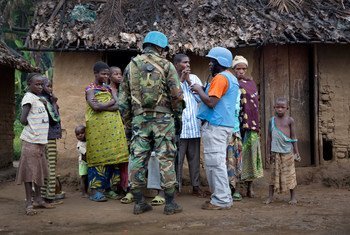 14 January 2014
The United Nations today reported a new rebel attack in the eastern Democratic Republic of the Congo (DRC) as the region continues to suffer from deadly violence even after the defeat of a major dissident group, the M23, over a month ago.