United Nations Secretary-General Ban Ki-moon has welcomed the establishment of a new transition Government in the Central African Republic (CAR), and urged determined national and international efforts to stop sectarian violence which is affecting more than half of the country’s population.

In a statement last night from his spokesperson, Mr. Ban congratulated the new Head of State of the Transition, Catherine Samba-Panza, and Prime Minister Andre Nzapayeke for their efforts to “put the transition back on track.”

Ms. Samba-Panza, CAR’s first woman leader, was elected last week by the country’s transitional parliament. She took over from Michel Djotodia, who had replaced ousted president François Bozizé, and resigned earlier this month, along with his prime minister, after failing to check the spiralling religious violence.

“The establishment of a new Government offers a fresh opportunity to move the political process forward,” said Mr. Ban, who is currently in Cuba for a regional summit.

In the statement, he reiterated the United Nations readiness to support CAR transitional authorities in their efforts to ensure the security and the welfare of the people.

Thousands of people are estimated to have been killed, and 2.2 million, about half the population, need humanitarian aid in a conflict which erupted when mainly Muslim Séléka rebels launched attacks in December 2012 and has taken on increasingly sectarian overtones as mainly Christian militias known as anti-Balaka (anti-machete) have taken up arms.

Mr. Ban’s comments came the same day that the Security Council extended the mandate of the UN peacebuilding office in the country (BINUCA), authorized the deployment of a European Union force with a mandate to use force, and added travel bans and asset freezes to an arms embargo already in place.

The 15-member Council unanimously adopted the new resolution expressing deep concern at the “continuing deterioration of the security situation in the CAR” which it said is characterized by a “total breakdown in law and order, the absence of the rule of law, religiously motivated targeted killings and arson.”

Mr. Ban called the adopting “timely” and noted that the Council’s engagement is “crucial” to restoring peace and stability in the country.

Last month, the Council authorized an African-led and French-backed peacekeeping force known by its French acronym MISCA to quell the violence in CAR.

The Secretary-General reiterated his appeal “to all those in a position to do so to provide financial and in-kind assistance to MISCA” and to announce their contributions at the MISCA donor conference to be held on 1 February in Addis Ababa, Ethiopia. 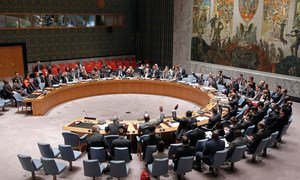 Seriously concerned by widespread human rights violations and the “increasing cycle of violence and retaliation” in the Central African Republic (CAR), the Security Council today extended the mandate of the United Nations peacebuilding office in the country, authorized the use of force by European Union troops, and added travel bans and asset freezes to an arms embargo already in place.