A senior United Nations official today stressed that agriculture is the engine of growth needed to eradicate hunger and boost food production in Africa, ahead of the launch later this week of the 2014 African Year of Agriculture and Food Security.

A senior United Nations official today stressed that agriculture is the engine of growth needed to eradicate hunger and boost food production in Africa, ahead of the launch later this week of the 2014 African Year of Agriculture and Food Security.

José Graziano da Silva, the Director-General of the Food and Agriculture Organization (FAO), noted that several African countries have already reached the Millennium Development Goal (MDG) hunger target of reducing by half the proportion of undernourished people between 1990 and 2015.

“But despite individual success stories, as a whole, Africa needs to step up its efforts: more than one out of every five of its citizens is still denied the right to food,” Mr. Graziano da Silva said at an event on the margins of the African Union (AU) Summit in Addis Ababa, Ethiopia.

“Africa can change this situation,” he said, pointing to the fact that most of the 10 fastest growing economies in the world are in Africa.

The challenge for Africa, he added, is to make this economic growth more inclusive by targeting agricultural and rural development, women and young people.

Some 75 per cent of Africans are 25 years old and under, and the population is expected to remain largely rural for the next 35 years, with women heading up many households.

“Agriculture is the only sector of the economy capable of absorbing this workforce,” Mr. Graziano da Silva said. “There is no inclusive and sustainable way forward for Africa without women, youth and agriculture.”

Later this week, the Summit will see the launch of the 2014 African Year of Agriculture and Food Security, which the Director-General said is an important step towards a hunger-free and sustainable Africa.

The African Year will build on the efforts of the Comprehensive Africa Agriculture Development Programme (CAADP), launched in 2003, and is being observed in parallel with the UN’s International Year of Family Farming, also celebrated in 2014.

“For many years and in many parts of the world, small-scale farmers, pastoralist families and fisher folk were viewed as part of the problem of hunger,” Mr. Graziano da Silva said.

“That could not be further from the truth. Family farmers are already the main food producers in most countries, and they can do even more with the right kind of support. Our job is to create the conditions so they can blossom.”

This means transforming subsistence farmers into efficient and productive actors, he said. It also means improving access to financial services, training, mechanization and technology that are adapted to the needs of family farmers: the climatic and geographic conditions, to their stage of development, socially and culturally acceptable and economically feasible.

In addition, it means improving the connection of family farmers to markets so their production generates additional income to satisfy other basic needs.

He noted that leaders at this week’s AU Summit are expected to adopt the target of ending hunger in Africa by 2025.

“This will be a historic sign of political will and a show of confidence that, with our joint efforts, we can make it come true,” said the Director-General.

“The 21st Century is Africa’s century. And it starts with ending hunger.” 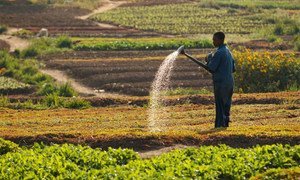 A new initiative fusing United Nations know-how, African leadership and the political backing of former Brazilian President Luiz Inácio Lula da Silva kicked-off today as the three partners declared their intent to join efforts in the fight against hunger and undernourishment in Africa.