UN Photo/Jean-Marc Ferré
Joint Special Representative of the UN and the League of Arab States for Syria Lakhdar Brahimi addressing a press conference in Geneva.
27 January 2014

Discussions on humanitarian issues at the Syria talks in Geneva “have not produced much,” said the Joint Special Representative of the United Nations and the League of Arab States today, but he added “there is still hope,” and the talks will resume tomorrow.

Lakhdar Brahimi briefed journalists at the Palais des Nations after a third day of talks with him acting as a buffer between representatives of the Syrian Government and opposition groups.

The discussions focused this weekend on getting an aid convoy into Homs, and on allowing civilians to leave the besieged city, cut off from supplies. The idea is that if agreement can be reached on humanitarian issues, it could bring the parties together to work through the political challenges.

The Syrian Government has agreed to allow women and children to exit “immediately”, but has asked for a list of the men’s names before letting the rest of the civilians pass.

“I think the Government is willing to make it happen, but it’s not easy because there are snipers and there are all sorts of problems,” Mr. Brahimi said.

On the food convoy, a topic that was to be discussed today in Syria by the Homs Governor, his advisors and the Government in Damascus, “there is no decision yet to let them in.”

“So I am still begging, asking, that we, something be done about these areas, whether these areas are under siege by the Government or by the armed groups,” Mr. Brahimi stressed.

Of the more than 9.3 million people within the country needing humanitarian aid, over 2.5 million live in areas where access is seriously constrained or non-existent, such as Homs.

In addition, well over 100,000 people have been killed and nearly 9 million others driven from their homes since the conflict erupted in March 2011 between the Government and various groups seeking the ouster of President Bashar al-Assad.

“My expectation from this conference is that the unjust war will stop. But I know this is not going to happen today or tomorrow or next week,” Mr. Brahimi told journalists, adding that despite a lack of progress, there is “will to continue these discussions.”

Mr. Brahimi, who has briefed journalists daily since the latest round of the talks started, also called on the two sides to be “a bit careful” with statement made to the media. 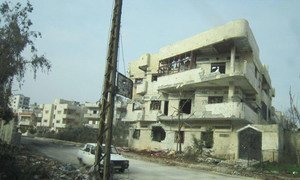 Syria: Civilians to be allowed out of Homs, UN-Arab League envoy says

The Syrian Government has agreed to allow women and children in the besieged Syrian city of Homs to leave “immediately”, the Joint Special Representative of the United Nations and the League of Arab States today said after a second day of face-to-face talks in Geneva.