27 January 2014
Coconut farmers in the Philippines are in urgent need of assistance to recover their livelihoods nearly three months after Typhoon Haiyan tore through the country, the United Nations food relief agency today warned, calling for donors to support its $38 million call for severely affected Philippine households.

“Coconut farmers are replanting, but what makes the situation so dire is that newly planted trees take between six to eight years to reach maturity and return to full production,” said Rajendra Aryal, acting UN Food and Agricultural Organization (FAO) Representative in the Philippines.

Philippines is the second largest coconut producer in the world, accounting for 26.6 per cent global production.

The typhoon flattened millions of trees when it made landfall in November and the country’s second largest coconut-producing region, Eastern Visayas, was one of the areas most affected, according to the FAO.

In this region alone some 33 million coconut trees were damaged or destroyed and more than a million coconut farmers impacted, with an estimated loss of $396 million, according to the Philippine Coconut Authority.

FAO is working closely with the Philippine Coconut Authority, humanitarian partners and local organizations to develop a recovery plan for the sector in Eastern Visayas.

“It is critical to develop alternative income sources for these small-scale farmers until their coconut trees become productive again,” Mr. Aryal said.

Crop diversification and intercropping can provide key access to income and restore self-sufficiency, building the resilience of communities to withstand future disasters, the UN agency has said.

Recovery efforts are also still needed in other sectors, FAO warned. Remote farming communities in upland areas who have received little or no humanitarian aid, fishers and coastal communities, and backyard livestock-keepers who lost their animals are all in urgent need of support.

FAO has called for $38 million to support more than 128,000 severely affected households in the Philippines and has so far received $12 million.

The UN agency provided around 44,000 of the worst-affected farming households with rice seed and fertilizer to plant in time for the December-January planting season. The amount is expected to feed around 800,000 people for one year. 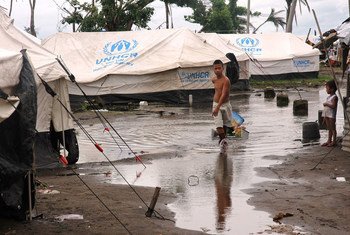 16 January 2014
The recovery process in the Philippines has been steady but uneven, the United Nations top relief official said today, urging donors to increase support for the $788 million response plan for Filipinos, who continue to depend on humanitarian support, particularly to rebuild their homes.