27 January 2014
An independent United Nations human rights expert has urged Qatar to make use of what she called its “privileged position” and embark on the reforms needed to consolidate its justice system and address its shortcomings.

An independent United Nations human rights expert has urged Qatar to make use of what she called its “privileged position” and embark on the reforms needed to consolidate its justice system and address its shortcomings.

“Unlike many other countries around the world, Qatar has the financial means to support important reforms and effectively implement a wide range of measures,” said Gabriela Knaul, the Special Rapporteur on the independence of judges and lawyers, as she wrapped up an eight-day visit to Doha yesterday.

Ms. Knaul praised Qatar’s achievements since the adoption of the Law on the Judiciary in 2003 and its current Constitution in 2004. “The legal framework in Qatar is soundly grounded in the principle of separation of powers and the independence of the judiciary, both recognised in the Constitution,” she said.

The Qatari court system was unified under the umbrella of the Supreme Judicial Council, a self-governing body of the judiciary that functions independently of the executive and this had significantly contributed to consolidating the administration of justice in the country, she added.

However, the expert noted that the justice system faced serious challenges affecting the delivery of justice and upholding of people’s human rights. “The executive’s interference in the work of the judiciary, particularly in cases involving high-level persons or businesses, is still a matter of concern,” she said.

Violations of due process and fair trial guarantees in the country, and the consequences that such violations often have on individuals’ lives and respect for their human right, were troubling, she said.

“I am particularly concerned at the situation of people in vulnerable situations, including women, migrants and domestic workers, who face additional hurdles when seeking to access justice,” said Ms. Knaul. She pointed to the reported discriminatory treatment of non-Qataris in the justice system, noting that the State is obliged under international human rights law to guarantee the right to a fair trial for all individuals within its jurisdiction regardless of nationality.

“I heard of a case where the defendant, a foreign national who did not speak Arabic, was made to sign a document in Arabic that included an admission of guilt. I also heard of cases where the defendant was not provided with interpretation during court hearings.

She also highlighted the apparent lack of transparency and access to information in judicial proceedings, including during the investigation phase. To address this, she recommended that Qatar should, among other measures, urgently adopt modern technology tools, record all hearings, and publicise all judicial decisions and cases.

Special Rapporteurs serve in an independent and unpaid capacity and report to the Geneva-based UN Human Rights Council, by whom they are appointed. Based on the information collected during the visit, Ms. Knaul will prepare a report to be presented to the Council in 2015. 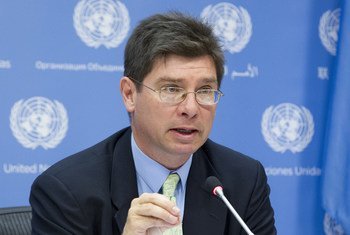 13 November 2013
A United Nations independent expert today urged Qatari authorities to use the 2022 soccer World Cup to improve the situation of migrant workers and their families in the country.