13 November 2013
A United Nations independent expert today urged Qatari authorities to use the 2022 soccer World Cup to improve the situation of migrant workers and their families in the country.

“I hope the 2022 World Cup will be used as an opportunity for Qatar to enhance the effective respect, protection and fulfilment of the rights of migrant workers,” the Special Rapporteur on the human rights of migrants, François Crépeau, said at the end of his first visit to the country.

Qatar has the highest ratio of migrants to citizens in the world; nearly 88 per cent of the total population are foreign workers, employed largely in construction, services and domestic work.

“The vast majority of migrants in Qatar are in the country at the Government’s invitation, and they have received work permits in order to fill labour needs, which are largely created by Qatar’s booming economy, massive construction projects, and widespread reliance on domestic workers,” Mr. Crépeau said.

He called on the Government to create a more positive perception of migrants in Qatari society, stressing that “migrants undertake important jobs in the country, are an essential part of Qatar’s economic success, and deserve to see their dignity and rights protected on par with that of citizens.”

Mr. Crépeau welcomed legislative developments such as the provision in the 2009 sponsorship law which made it illegal for sponsors to confiscate passports. However, he noted the need for effective enforcement of this law, as the practice seems to be still widespread.

The independent expert also warned that the 2004 labour law does not provide for a minimum wage, bans migrants from forming organizations and from collective bargaining, and excludes domestic workers.

“Many of the migrants I met with had paid recruitment fees in their home countries in order to be able to travel to Qatar,” he said, stressing need to formalize the recruitment process, and strictly monitor the role of private recruitment agencies. “I urge Qatari authorities to work together with countries of origin to ensure that migrants arrive in Qatar debt free.”

The Government should also review the sponsorship system which is used to regulate the relationship between employers and migrant workers, as it is a source of abuse against migrants.

“Migrants who ‘run away’ from abusive employers should not be detained and deported,” Mr. Crépeau stressed.

The expert drew special attention to the long term administrative detention, in some cases as much as one year, which can be applied to migrants awaiting deportation under the 2009 sponsorship law.

“I urge the authorities to systematically rely on non-custodial measures rather than detention,” he said. “As long as there is no risk of the migrant absconding from future proceedings, and they do not present a danger to themselves or others, detention is not necessary and thus a violation of their rights.”

Mr. Crépeau noted that the majority of the women in the country’s deportation centre had ‘run away’ from abusive employers, particularly the domestic workers, and they wanted to return to their countries of origin. “It is very unlikely that they present any risk of absconding,” he said.

During his eight-day visit, the human rights expert met with Government officials, representatives of the diplomatic community, the National Human Rights Committee, foundations, academics, as well as migrants themselves, including in labour camps, in the deportation centre, in the central prison, in shelters and in the streets.

Independent experts, or special rapporteurs, are appointed by the Human Rights Council to examine and report back on a country situation or a specific human rights theme. The positions are honorary and the experts are not UN staff, nor are they paid for their work. Mr. Crépeau will present a report of his visit to the Council in June 2014. 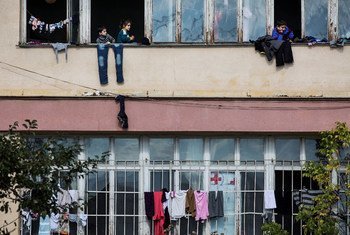 25 October 2013
Urging enhanced global migration governance, the United Nations independent expert on the human rights of migrants called today for the establishment of a single, rights-based international body, preferably within the UN system, to comprehensively tackle the myriad aspects of the phenomenon.