UNHCR/G. Gubaeva (file)
Thousands of Syrians stream across the border into Iraq in search of shelter.

21 January 2014
Secretary-General Ban Ki-moon arrived in Switzerland today on the eve of a United Nations-led conference on ending the nearly three-year-old civil war in Syria, and he immediately held talks with participants from various countries and regional organizations involved, as well as with a delegation from the Syrian opposition.

Secretary-General Ban Ki-moon arrived in Switzerland today on the eve of a United Nations-led conference on ending the nearly three-year-old civil war in Syria, and he immediately held talks with participants from various countries and regional organizations involved, as well with a delegation from the Syrian opposition.

Mr. Ban, who will tomorrow open the high-level part of the conference in Montreux, held discussions while still in Geneva with the High Representative of the European Union (EU) for Foreign Affairs and Security Policy, Catherine Ashton, on various aspects of the crisis, including efforts to bring humanitarian relief to a country where millions have been driven from their homes and many suffer from lack of food and medicines.

He then flew by helicopter to Montreux, where representatives of some 40 countries and regional organizations began gathering for tomorrow's meeting. This will be followed on Friday by talks between the Syrian parties at UN headquarters in Geneva in what will be the first time the Government and opposition meet at a negotiating table since the conflict started in March 2011.

In Montreux, Mr. Ban met with Nabil Elaraby, the Secretary General of the League of Arab States. They discussed the high-level segment of the Conference and subsequent intra-Syrian negotiations in Geneva. They shared concerns about the impact of the crisis on the region, in particular on the neighbouring countries, and discussed the issue of blocked humanitarian access, according to a note issued by Mr. Ban's spokesperson in New York.

The Secretary-General also met today with Iyad Madani , Secretary General of the Organization of Islamic Cooperation (OIC). They discussed the role the OIC can play politically and in terms of humanitarian assistance in ending the crisis in Syria. It was noted that all regional powers here at Montreux for the High-Level Segment of the Geneva Conference are also OIC members, a potential asset for helping to find a solution.

Also today, Mr. Ban met today with His Royal Highness Prince Saud al-Faisal, Minister for Foreign Affairs of the Kingdom of Saudi Arabia. They discussed the conference and the need to end the conflict in Syria. They also spoke about Yemen and applauded the National Dialogue, which is now concluding. They also spoke about Lebanon and the need to support its stability. The Secretary-General thanked Saudi Arabia for its support to the Lebanese Armed Forces.

The basis of these talks is full implementation of an action plan adopted in the so-called Geneva Communique of 2012, which calls for a transitional government to lead to free and fair elections.

Participants will also seek to make arrangements for humanitarian aid to flow into a country where well over 100,000 people have been killed and more than 8 million others driven from their homes since the conflict erupted between the Government and various groups seeking the ouster of President Bashar al-Assad.

The Montreux meeting is designed to give international support to the efforts to resolve the deadly conflict that has torn Syria apart, while the Geneva talks will be restricted to the two Syrian delegations and the UN-Arab League Joint Special Representative Lakhdar Brahimi, who is organizing the conference. 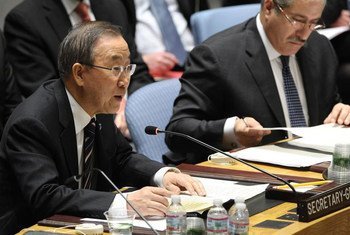 20 January 2014
Secretary-General Ban Ki-moon today withdrew his invitation to Iran to attend a United Nations conference on ending the nearly three-year-old Syrian civil war, voicing “deep disappointment” that Iranian public statements were totally inconsistent with oral assurances he had been given.