20 January 2014
Secretary-General Ban Ki-moon today withdrew his invitation to Iran to attend a United Nations conference on ending the nearly three-year-old Syrian civil war, voicing “deep disappointment” that Iranian public statements were totally inconsistent with oral assurances he had been given.

Mr. Ban announced last night that he had invited Iran to attend the conference’s opening in Montreux, Switzerland, on Wednesday after Foreign Minister Javad Zarif assured him that his country understands that the basis of the talks is full implementation of an action plan adopted in the so-called Geneva Communique of 2012, which calls for a transitional government to lead to free and fair elections.

“The Secretary-General is deeply disappointed by Iranian public statements today that are not at all consistent with that stated commitment,” Mr. Ban’s spokesperson, Martin Nesirky, said in a statement at UN Headquarters in New York.

“He continues to urge Iran to join the global consensus behind the Geneva Communiqué. Given that it has chosen to remain outside that basic understanding, he has decided that the one-day Montreux gathering will proceed without Iran’s participation.”

Mr. Nesirky’s statement said Mr. Ban has consistently maintained that regional partners with influence on the Syrian parties should do their part in promoting implementation of the action plan, including setting up a transitional governing body with full executive powers, and stressed that he has tried to ensure that “all those who can contribute to the success of a Syrian peace process be present in Montreux to express their solidarity and support for the Syrian people.”

Earlier today, media reports indicated that Syria’s political opposition said it would withdraw from the talks unless Mr. Ban retracted the invitation to Iran, while the US suggested it could support Iran’s participation if it explicitly declared support for the action plan.

“During the brutal conflict of the past three years, the Syrian people have experienced horrendous suffering, humanitarian shortages and human rights abuses,” the statement read out by Mr. Nesirky said. “The Geneva Communiqué of 30 June 2012 remains the internationally agreed framework for ending the crisis.

“It is the basis on which the global community will gather on Wednesday in Montreux, Switzerland, and the foundation for the negotiations between the Syrian parties that will begin on Friday in Geneva. Throughout the Syrian conflict, the Secretary-General has sought to do everything within his power for a political solution, which is the only path forward.”

The Secretary-General said he looks forward to joining the initiating parties, Russia and the US, as well as some 40 other States and organizations that will attend “this long-awaited and hugely important push for peace.

“The Syrian parties, the region and the international community have an opportunity and a responsibility to end the violence and begin a transition towards a new Syria,” the statement concluded. 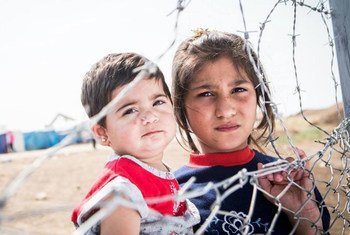 19 January 2014
Secretary-General Ban Ki-moon has welcomed the decision taken on Saturday by the opposition National Coalition of Syrian Revolution and Armed Forces to participate in this week’s international conference that aims to peacefully resolve the ongoing conflict.