Central African Republic: over 6,000 child soldiers may be involved in fighting, UN says

More than 6,000 child soldiers may now be involved in the conflict in the Central African Republic (CAR), with their numbers growing as fighting pits community against community in clashes that have taken on increasingly sectarian overtones, the United Nations reported today.

Recruitment is happening on all sides, with reasons including poverty, despair, desire for revenge, and the general lack of options for children, and there have been many reports of girls being used as sex slaves, UN Children’s Fund (UNICEF) spokesperson Marixie Mercado told a news briefing in Geneva, stressing her agency’s efforts to free all child soldiers.

Thousands of people in CAR are estimated to have been killed, nearly 1 million driven from their homes, and 2.2 million, about half the population, need humanitarian aid in a conflict which erupted when mainly Muslim Séléka rebels launched attacks a year ago, and has recently taken on increasingly Muslim versus Christian overtones as militias known as anti-balaka (anti-machete), who are mainly Christians, take up arms.

Ms. Mercado said 23 children aged between 14 and 17 years were released from armed groups in Bangui, the capital, yesterday, with many more identified for release in the coming days, after an agreement between UN officials and the transitional authorities to allow unimpeded access to all military bases so that children with the ex-Séléka/national forces can be released to child protection actors.

The children, who include six girls, have been taken from a military base to a UNICEF-supported Transit and Orientation Centre. Since last May, UNICEF and its partners have secured the release of 229 children associated with various armed groups in CAR.

The number of child soldiers is believed to have risen considerably due to the recent escalation in fighting and the emergence of self-defence groups such as the anti-balaka, mounting from 2,000 before the current wave of clashes to more than 6,000 now.

Meanwhile the UN World Food Programme (WFP) reported that insecurity is impeding the movement of convoys beyond Bangui, with no trucks able to reach Bozoum for the past 15 days. After repeated delays due to clashes and checkpoints, WFP was finally able to send through four trucks to Bossangoa on 14 January, spokesperson Elisabeth Byrs told the briefing.

Due to a combination of factors, some 400 trucks, including 48 WFP trucks with food and other humanitarian goods, are stuck at the border with Cameroon. WFP cereal stocks in Bangui are no longer sufficient and the agency will have to cut rations from 20 January and suspend distributions outside of Bangui airport, where 100,000 people have sought refuge, and Bossangoa.

Ms. Byrs stressed that current funding is insufficient to cover CAR needs, with the shortfall now standing at $95 million - 88 per cent of the resources needed for food, nutrition, and emergency school meals.

After March, WFP will no longer be able to respond, and additional commitments are required now to avoid cutting rations or suspending aid in an already tense and volatile context.

The rainy season, due in April, will aggravate already poor road conditions, with movement beyond the capital and main towns being extremely reduced, coinciding with the peak of the lean season, when the impact of the current crisis on household food security and nutrition will be even further exacerbated, and access to food further strained by additional peaks in food prices.

It is imperative to pre-position stocks in strategic locations by April to ensure that WFP is in a position to respond, Ms. Byrs added.

The UN Integrated Peacebuilding Office in the Central African Republic (BINUCA) reported today that an election to fill the position of the Head of State of Transition is expected to take place next on Monday, and along with its regional and international partners, the Office is providing advice and other support to the process.

Last week, transitional President Michel Djotodia and Prime Minister Nicolas Tiangaye, who came to power after Séléka fighters drove then-President François Bozizé out of the country in March, resigned. UN officials have said this has opened a new opportunity.

Secretary-General Ban Ki-moon’s Special Representative in CAR, Babacar Gaye, is calling on the country’s people and leaders to maintain calm and show maturity at this critical juncture. 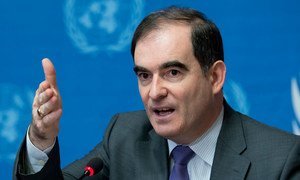 Donors have provided only 6 per cent of the $247 million that the United Nations needs over the next 100 days to ease the “mega-tragedy” in strife-torn Central African Republic (CAR), where nearly 900,000 people have been driven from their homes and now lack the very basics of food, water, medical care and shelter.