UN Photo/Jean-Marc Ferré
Director of Operations at OCHA, John Ging, briefs the press on the situation in the Central African Republic following his recent visit there.

16 January 2014
Donors have provided only 6 per cent of the $247 million that the United Nations needs over the next 100 days to ease the “mega-tragedy” in strife-torn Central African Republic (CAR), where nearly 900,000 people have been driven from their homes and now lack the very basics of food, water, medical care and shelter.

“We cannot deliver in any way, shape or form, to meet the needs of this population, without the mobilization of the resources that we require,” John Ging, Director of the Operational Division at the UN Office for the Coordination of Humanitarian Affairs (OCHA), told journalists in Geneva following a five-day visit to the impoverished country, which has seen a total collapse of its infrastructure in a year-long conflict.

“We understand the reasons that are been given, but we cannot accept them,” he said, noting that over-stretched donors explain that they just do not have the means to meet all the humanitarian appeals across the world, which now total over $12.9 billion. The $247-million Strategic Response Plan (SRP) for the Central African Republic was launched last month.

“There have to be solutions found where the global escalation of humanitarian needs is matched with the corresponding increase in funding,” Mr. Ging stressed, calling for donors to move CAR up the priority list. “It has languished at the bottom…for far too long.”

Thousands of people in CAR are estimated to have been killed and 2.2 million, about half the population, need humanitarian aid in a conflict which erupted when mainly Muslim Séléka rebels launched attacks a year ago, and has recently taken on increasingly sectarian overtones as mainly Christian militias, known as anti-balaka (anti-machete) take up arms.

“Ordinary people from both communities are living in fear, and that fear is being expressed by them having to flee their homes in the face of atrocities being committed and live in these camps for the internally displaced, or flee in the countryside into the forests. Both communities want nothing more than security, peace, and an environment in which they can return home and rebuild their lives. This was the consistent message from everybody that I met.”

But he also warned that these embers could be stoked into all-out ethnic or religious violence. “We are all very concerned about the possibility of this conflict, initiated and incited by extremely violent people who have an agenda to try to convert this into an inter-ethnic, inter-religious conflict and are seeking to spark the flames of such a conflict,” he said.

“The communities are resisting that but they are in fear. And the incitement is that they need to defend themselves. We have seen that, heard that, in too many previous tragedies and we cannot allow it to happen in this case,” he added, stressing the need for a very large scale international engagement beyond the humanitarian side, which he called “a tragedy - a mega-tragedy” to also include the political, security and development.

“What we have today in CAR is a country on a map, territory marked out but we don’t have the infrastructure of a state any longer. Politically the country has collapsed; the public service institutions (health care, education, social services) have collapsed. This results in the first instance in a very tragic situation for the population, in terms of their humanitarian status.

“Compounding this is the collapse of the security infrastructure of the State. The army and the police force have also disintegrated. This has left the population with a massive protection crisis.”

Last week, transitional President Michel Djotodia and Prime Minister Nicolas Tiangaye, who came to power after Séléka fighters drove then-President François Bozizé out of the country in March, resigned, and Mr. Ging said this has opened a new opportunity.

“But the people, as they communicated to me, want to see action that they can build their confidence around, and so far, they are hopeful, but sceptical,” he added.

“It will very much depend on the coming days in terms of the generation of a more positive dynamic among communities who are overtaken by a sense of mortal fear, fear for their lives, as they wait to see who will be appointed in the new leadership position and as to whether there is going to be positive change or not. We must understand that there is first and foremost a dynamic of fear in the population.”

He noted that the UN World Food Programme (WFP) has so far “very impressively” mustered basic food for 300,000 people, the UN refugee agency (UNHCR) has provided shelter for 20,000 internally displaced persons (IDPs) in Bangui, the capital, where there are 500,000 IDPs in, and non-governmental partners are mobilizing medical assistance.

“We are only appealing for money for the very basics, to feed people, to provide basic medical care, clean water, the basic for shelter and so on,” he concluded. “That is what the $247 million is to deliver. Yet we have only $15.5 million so far.” 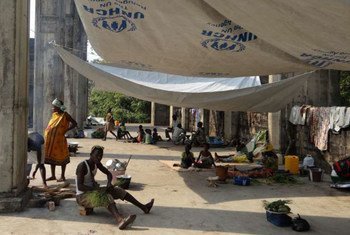