Rape, the deliberate targeting of civilians based on their religion and attacks on places of worship were also among the violations documented by the four-person team from the Office of the UN High Commissioner for Human Rights (OHCHR) that visited the country from 12 to 24 December.

Thousands of people have been killed and nearly 1 million driven from their homes in recent weeks in CAR, where armed attacks between mostly Muslim ex-Séléka and Christian anti-Balaka militias have escalated significantly.

OHCHR said in a news release that although the number of clashes appears to have slightly diminished in recent days, around 40 people are reported to have been killed in the capital, Bangui, since Friday and a number of kidnappings, mutilations and widespread looting also occurred over the weekend. More violence, killings and looting have also been reported in other parts of the country in recent days.

“Despite some important reconciliation efforts in Bangui, the situation remains extremely volatile and dangerous,” High Commissioner Navi Pillay warned. “Without serious intervention, further attacks, including massive violations such as those that took place on 5 December may well re-occur.”

However, she warned the new authorities not to resort to a shoot-to-kill policy, saying that “it is essential the Government’s own response does not breach international human rights law.”

The team documented numerous extra-judicial killings perpetrated in Bangui on 5 and 6 December, after the launch of a coordinated attack by anti-Balaka forces. During the clashes, anti-Balaka forces killed members of the ex-Séléka forces but also deliberately targeted Muslim civilians, including women and children.

During the reprisals that followed, numerous extra-judicial killings were also carried out by ex-Séléka forces. Ex-Séléka detained and reportedly executed civilian males, including boys, in Camp Kassai, and also searched for and executed men and boys at hospitals, including severely injured patients.

According to eyewitnesses, the local Muslim population participated in killings and looting, for example in the neighbourhoods known as PK12 and PK23, where a group of men wearing military uniforms, along with Muslim Peul civilians, were seen entering civilian residences, allegedly separating the men from the women and killing them.

The team also documented cases of attacks on places of worship involving anti-Balaka attacking mosques, such as in Fouh District, where some 200 anti-Balaka reportedly attacked and burned the mosque, killing and mutilating several people.

Since the end of the first phase of intense fighting on 5-6 December, sporadic clashes continued, resulting in multiple incidents of tit-for-tat Muslim and Christian civilian killings, particularly in Bangui, but also in other parts of the country, such as Ouham and Nana-Mambéré Prefectures.

The preliminary findings suggest that the deployment of French troops and the reinforcement of African peacekeepers, and the subsequent cantonment of ex-Séléka fighters, have to some extent deterred further large-scale attacks by ex-Séléka against anti-Balaka and Christian civilians.

However, the team received multiple reports that the disarmament of ex-Séléka carried out by the French forces left some Muslim communities vulnerable to anti-Balaka retaliatory attacks. There were several incidents in Bangui during which anti-Balaka or hostile mobs targeted and killed recently disarmed ex-Séléka elements and their families.

The UN team also reports that it received multiple testimonies identifying certain ex-Séléka perpetrators as being Chadian nationals. Witnesses consistently reported that ex-Séléka, wearing the armbands of Chadian FOMAC peacekeepers, went from house to house searching for anti-Balaka, and shot and killed civilians. The team also said it received credible testimonies of collusion between some Chadian FOMAC elements and ex-Séléka forces.

The UN Human Rights Council is set to hold a special session on the situation in CAR on 20 January in Geneva, at which the High Commissioner will give a fuller account of her team’s findings, as well as an update on the human rights situation in the country. 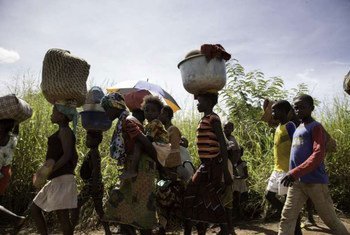 23 December 2013
Urgent national and international action is crucial to prevent the Central African Republic (CAR) from plunging into full-scale sectarian conflict and protect civilians, particularly women and children, from atrocities that have already killed thousands and driven 750,000 others from their homes amid reports of rape and mutilation, United Nations human rights officials have warned.