16 January 2014
Mali is at a crossroads, the top United Nations official in the country told the Security Council today, as he urged the international community to continue to actively support ongoing national efforts to steer the West African nation in the right direction and prevent it from relapsing into crisis.

“With the progress achieved over the last six months, the window to proceed to the next level is wide open,” the Special Representative of the Secretary-General, Bert Koenders, told journalists after meeting with the 15-member Council.

“The Government and key stakeholders must seize this opportunity to advance – with the support of the international community and MINUSMA [UN Multidimensional Integrated Stabilization Mission in Mali],” he added. “There is no room for complacency or for delays.”

Presenting Secretary-General Ban Ki-moon’s latest report, Mr. Koenders told the Council that 2013 was “decisive for the people of Mali” and despite challenges, the country was able to move forward. He noted that “free and transparent” presidential and legislative elections took place over the summer resulting in a “full return to constitutionality” in the country.

Mr. Koenders highlighted President Ibrahim Boubacar Keita’s priorities, which aim to stabilize and economically revitalize the country: national reconciliation; the fight against impunity and corruption; reform of the security sector; and the reinforcement of institutional capacity and development, including the northern regions.

He urged the Government to quickly implement the goals, with support from the international community, which, he said, stands ready to assist.

Looking ahead, he said that next steps are laid out in Mr. Ban’s report, and include the start of inclusive peace talks as a matter of urgency to ensure a new social and political contract with the North.

He referred to the need for a “cadre de concertation” between Malian authorities and the UN on this issue. He also indicated that progress must be made to regroup ex-combatants, to devise a comprehensive process of disarmament, demobilization, and reintegration (DDR).

“These efforts must get traction in the weeks to come,” Mr. Koenders said, noting that although weakened, extremist groups remain in the North, and four UN peacekeepers were killed in recent months. “An inclusive peace process is also needed to leave no room for such spoilers.”

Speaking after the briefing, a representative of Jordan, which holds the Council’s presidency this month, stressed the importance of MINUSMA reaching its full capacity of 12,600 strong.

The Council established the Mission in April to use “all necessary means” to carry out security-related stabilization tasks, protect civilians, UN staff and cultural artefacts, and create the conditions for provision of humanitarian aid.

Mr. Koenders said that Member States have pledged around 90 per cent of the authorized troops, personnel and equipment to MINUSMA – among them China, El Salvador and the Netherlands.

They should be on the ground by the end of spring, beginning of the summer, he said. The Mission currently contains 5,488 of the anticipated 11,200 military personnel; 71 out of 320 police officers; and 883 out of 1,120 Formed Police Units (FPU) elements.

“Your support to secure the necessary enablers and force multipliers in a timely fashion is promising and remains essential,” the Special Representative told the Council. 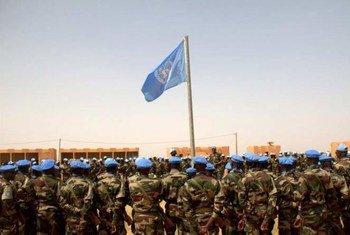 14 December 2013
Secretary-General Ban Ki-moon and the Security Council have strongly condemned an attack in the north-eastern Malian town of Kidal that killed two blue helmets and left several others, including members of the national armed forces, injured.