Logan Abassi/MINUSTAH
The Haitian government and the UN Operations have teamed up with project 16/6 - a rebuilding initiative that includes construction training programs.

12 January 2014
United Nations officials are calling on the international community to increase aid to Haiti on the fourth anniversary of the devastating earthquake that struck the impoverished country, as well as pledging the Organization's ongoing solidarity with the Haitian people and Government.

“Haiti remains extremely vulnerable on many fronts,” Secretary-General Ban Ki-moon said in a message delivered on Friday to UN staff in Port au Prince, the capital, by his Special Representative Sandra Honoré.

"145,000 people continue to live in make-shift camps. The country is structurally exposed to recurrent food crises. Haiti has the lowest level of water and sanitation coverage in the Americas.”

“I continue to call on the international community to stand with Haiti at its time of dire need. We must intensify our efforts to help Haiti build a more stable and prosperous future for the all its people. Let us renew today our pledge to follow our fallen colleagues' dream of a life of dignity for all the people of Haiti.”

The massive quake which struck Haiti on 12 January, 2010, killed some 220,000 people, including 102 UN staff, made 1.5 million others homeless, and caused widespread destruction and a major humanitarian crisis.

“Your commitment, combined with the resilience of the Haitian people, has made much progress possible,” Mr. Ban told UN staff. “Health systems are being strengthened, more children are in school, close to 90 per cent of the displaced population have left the camps and economic activities have resumed allowing Haiti to start moving from crisis to long-term development.”

Referring to his own visit to the country shortly after disaster struck, he said the personal stories of heroism, courage and dedication that he saw and heard “moved me deeply and showed the United Nations at its best.

“I pay tribute to all UN colleagues who have strived through the years to keep alive the memory of our fallen colleagues and friends and serve the people of Haiti,” he added. “This includes those who remained after the earthquake to deliver life-saving support and consolation to the other victims. It also includes those who arrived later to carry on the worthy cause of helping Haiti rebuild its future.

In her own statement, issued ahead of a ceremony today in the Haitian capital, Ms. Honoré expressed the deep attachment of the entire United Nations family to the memory of all those Haitians and foreigners who lost their lives in the tragic earthquake, and ongoing solidarity towards all those who suffered physically and psychologically.

“The United Nations in Haiti continues to support Haitian national and local authorities in their work of recovery and reconstruction for the country and for the benefit of the Haitian people,” she said, underscoring that results and progress in various fields have been recorded – all within the scope of the institutional and structural work that is underway.

She said that the UN Country Team will continue to focus on joint programme activities in accordance with the United Nations Integrated Strategic Framework, approved by the Government of Haiti, in coordination with the UN Mission for Stabilization in Haiti (MINUSTAH) and its consolidation plan. 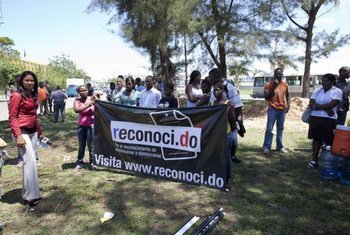 6 December 2013
Voicing deep concern over a ruling that renders countless Dominicans of Haitian descent stateless, the United Nations High Commissioner for Refugees (UNHCR) has urged the Dominican Government to rapidly restore the nationality of those affected.