UN Photo/Hailemichael Gebrekrstos
Civilians fleeing the fighting and seeking refuge, wait outside a compound of the UN Mission in Bor (December 2013).
12 January 2014

The United Nations Mission in South Sudan (UNMISS) said today that as it continues to gain access to besieged areas, the number of people killed in the current round of fighting in the world's youngest country “must be much higher” than the 1,000 figure given earlier in the conflict, which erupted nearly a month ago and continues to grind on.

In a news release from Juba, UNMISS notes fresh media reports estimating that up to 10,000 people may have been killed since the conflict started on 15 December 2013, after President Salva Kiir said soldiers loyal to former vice-president Reik Machar, dismissed from office in July, launched an attempted coup.

On 26 December, 10 days into the crisis, the Mission estimated that 1,000 people may have been killed in the fighting. “This was based on UNMISS' initial monitoring and investigations in Juba and other relatively more stable locations where its Human Rights Officers and other staff were able to access, investigate and document the unfolding developments,” the Mission said today.

Yet, after two weeks of subsequent violence, characterized by sometimes intense fighting with heavy weapons, there are now clear indications that the casualty count must be much higher, says UNMISS, adding that while it has continues to closely monitor the human rights situation, interviewing witnesses, and following leads, it “is not at this stage in a position to establish and verify the exact numbers of casualties.”

The Mission recalls that on 9 January, Hervé Ladsous, the head of UN Peacekeeping Operations, speaking to reporters in New York following a three hour briefing to the Security Council on the situation in South Sudan, said: “We are not able to provide final figures. We know it will be very substantially in excess of the 1,000 figure”.

Meanwhile the Mission says that despite serious security constraints due to the fighting in Bor and Bentiu, which has restricted access by its Human Rights Officers, during the course of last week, UNMISS began interviewing victims and eyewitnesses among displaced people from Bor who have arrived in Juba and Awerial County in neighbouring Lakes State. UNMISS Human Rights Officers have also been able to return to Bor on 9 January.

UNMISS chief Hilde Johnson called on all parties to cease hostilities immediately, and respect and protect civilians. “She reiterates Secretary-General [Ban Ki-moon's] reminder that those who commit such heinous acts will be held accountable,” the news release adds.

UNMISS vowed to continue investigating and documenting atrocities committed by both sides, in all affected areas and called on the Government and the anti-Government forces to cooperate with “these important investigations and to facilitate unhindered access by the Mission's Human Rights Officers to all affected areas.”

In addition, this past Friday, Mr. Ban that announced that he would dispatch UN Assistant Secretary-General for Human Rights, Ivan Simonovic, to South Sudan this weekend to look into cases of violations believed to have been committed during the conflict, which has displaced some 230,000 people, more than a quarter of whom are seeking refuge on UN bases. 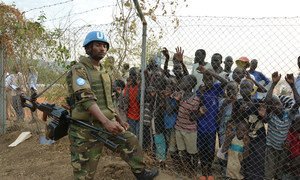 With the Security Council renewing its call on all parties in strife-torn South Sudan to end the violence, protect civilians and ease access for relief workers, the wider United Nations organization today continued its efforts help alleviate the “extremely volatile” situation by moving to reinforce peacekeepers and scale up its humanitarian response.