16 December 2013
The United Nations and its partners will need nearly $13 billion in funding to reach millions of people with life-saving aid in 2014, with half of that sought for those affected by the deepening crisis in Syria.

The $6.5 billion sought to assist millions of Syrians inside the country and across the region is the biggest amount so far requested for a single humanitarian emergency. The conflict, which began in March 2011, has left some 8 million people in need of humanitarian assistance.

“As we look towards the fourth year of this appalling crisis, its brutal impact on millions of Syrians is testing the capacity of the international community to respond,” Under-Secretary-General for Humanitarian Affairs Valerie Amos said at the launch of the appeals in Geneva.

In total, aid agencies are aiming to 52 million people worldwide with assistance, launching humanitarian response plans for 17 countries, the UN Office for the Coordination of Humanitarian Affairs (OCHA) said in a news release.

Complex crises in Syria and its neighbours, as well as in Philippines and Yemen have displaced or affected 35 million men, women and children who need emergency relief, protection and basic services to sustain them on a daily basis.

The protracted crisis in the Central African Republic (CAR) has deteriorated into a major humanitarian emergency with more than half a million people displaced and half the entire population in urgent need of aid.

“I have seen people in desperate circumstances in the Central African Republic and Yemen, the typhoon-devastated parts of the Philippines and in many other countries I have visited this year,” said Ms. Amos, who is also UN Emergency Relief Coordinator.

“It is hard to put into words their despair, but also the dignity with which they endure the most painful and difficult circumstances. We count on the continued support from our partners as we work to save lives and support the millions of people caught in crisis.”

A total of 568 aid organizations are participating with projects in Afghanistan, CAR, Democratic Republic of the Congo, Haiti, Myanmar, occupied Palestinian territory, Philippines, Somalia, South Sudan, Sudan, the combined plan for Syria and neighbouring countries, and Yemen. The plans for the Sahel will be launched early next year.

“What is clear already is that 2014 will be a very challenging year for all of us. Globally, forced displacement levels are approaching record highs. It is critically important that humanitarian organizations are properly in a position to respond,” said UN High Commissioner for Refugees António Guterres.

Funding for consolidated and flash appeals reached an unprecedented $8 billion in 2013, exceeding the previous high of $7.2 billion in 2010. Despite the generosity of donors and individuals, funding of the coordinated plans and appeals is only at 60 per cent of requirements. 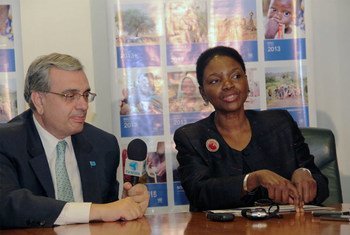 5 March 2013
The United Nations humanitarian chief today urged the international community to dig into its wallet for the $10.4 billion needed this year to help more than 57 million people around the world.