Governments around the world pledged $1.13 billion on Tuesday to provide a lifeline to people displaced by war, violence and human rights violations, the UN refugee agency, UNHCR, said on Tuesday.

This allows the UN agency to start the new year, confident that it can cover 15 per cent of anticipated needs, said the agency in a press release.

🚨 This is an emergency.

Lack of funding means less support for refugees. At today’s annual Pledging Conference, our donors are standing in solidarity with the world's displaced and will step up vital funding: https://t.co/S1r6UjfLJp @MaryMaker10 #UNHCRappeal https://t.co/7lns2D6lfb

“As a result of conflict, the climate emergency, and other crises, a record number of displaced people around the world face unprecedented needs,” said the High Commissioner for Refugees. Filippo Grandi.

“Fortunately, UNHCR’s generous donors continue to support them during these dire days, creating hope for a brighter future.”

The US provided UNHCR with a record $ 2.1 billion this year, and led the 2023 pledges with a $200 million commitment, followed by Germany and Japan.

In response to UNHCR’s appeal for more flexible funding that enables agility in an emergency and allows the UN agency to address underfunded situations, Sweden, Denmark, Norway, and the Netherlands have each stepped up.

As new conflicts arise and others go unresolved, there are now more than 100 million forcibly displaced – the highest number ever recorded.

By promoting their empowerment and inclusion, helping to resolve their situations, and making them less dependent on humanitarian aid, UNHCR programmes support the displaced as well as national programmes and communities that host them.

“I was distressed by the cuts we were forced to make this year to lifesaving programmes as funding fell short of needs”, Mr Grandi said.

“We are living in turbulent times. Unresolved conflicts, rising prices, and more damaging climate events are piling pressure onto the most vulnerable. The funding announced today will help alleviate some of the hardship, but much more is needed throughout the year”.

Governments attending the conference also pledged $721 million for 2024 and beyond – a crucial contribution to the planning and stability of UNHCR’s longer-term support programmes.

The High Commissioner highlighted that he was “heartened by the outpouring of support from the public in so many countries for UNHCR’s work in Ukraine and beyond”.

UNHCR/Andrew McConnell
A Syrian family who had fled from their hometown near Homs, settled temporarily in Lebanon.

UNHCR’s Global Appeal 2023 sets out the challenges that the agency foresees in 2023 and its plans to tackle them.

The response to the situations in Ukraine and Afghanistan and many other evolving and protracted crises, means that UNHCR’s 2023 budget is 13.5 per cent higher than the original budget set this year, of $8.994 billion.

Throughout this year, UNHCR had to issue supplementary appeals, notably to meet the rising needs in Ukraine.

Although donors have repeatedly raised their contribution levels, global needs have risen faster. 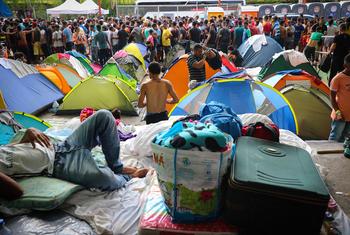 $1.72 billion plan launched to support Venezuelans on the move in Latin America and the Caribbean

Two UN agencies launched on Thursday, a $1.72 billion regional plan to support Venezuelan refugees and migrants throughout Latin America and the Caribbean (LAC). 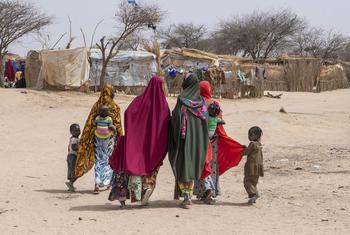 Invest more in Africa’s Sahel, or risk decades of armed conflict and displacement

Without urgent investment in climate mitigation and adaptation, countries in the Sahel risk decades of armed conflict and displacement, exacerbated by rising temperatures, scarcity of resources and food insecurity, the UN has warned in a report published on Wednesday.