He spoke with Sheikh Hasina and President Abdul Hamid by phone as a senior UN political official wrapped up a five-day visit to the South Asian country with a warning that the current political crisis is exacting a heavy, human, social and economic toll, seriously threatening the hard-earned economic and social progress that Bangladesh has achieved.

“The leaders have shown statesmanship,” Assistant Secretary-General for Political Affairs Oscar Fernandez-Taranco told a news conference in Dhaka, the capital, of his meetings with Government and opposition leaders and election officials. “It remains critical to reduce tension and to continue to engage in constructive dialogue so as to create a congenial atmosphere.

“There are measures that would contribute immensely: a call by all sides to end the violence, the release of opposition political leaders, and a mutually satisfactory solution to concerns regarding the election schedule.”

The major parties have so far failed to resolve their differences over the conduct of elections and supporters of both parties have been clashing with each other and with the security forces. Scores of people have been killed, hundreds injured, and there has been extensive destruction of property.

“At this moment the world is remembering Nelson Mandela’s legacy,” Mr. Fernandez-Taranco said, referring to the South Africa’s first black President who died last week. “Please allow me to quote his words from the visit he made to Bangladesh in March 1997: ‘a nation united in pursuit of shared goals can overcome the most difficult problems.’”

He added that there is ground for an agreement and the country’s leaders must continue their dialogue in the spirit of good will and compromise. “Bangladeshis expect them to work together constructively to decrease tensions and to find mutually agreeable solutions for free, fair, inclusive and non-violent elections,” he stressed.

At the beginning of December, UN High Commissioner for Human Rights Navi Pillay urged the country's political leaders to immediately halt “destructive brinkmanship” and use their influence to ease the unrest. 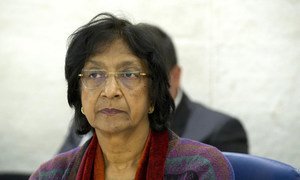 Deeply worried by rising levels of violence in Bangladesh, United Nations High Commissioner for Human Rights Navi Pillay today urged the country's political leaders to set their differences aside, immediately halt “destructive brinkmanship” and use their influence to ease the unrest.