11 December 2013
A new United Nations report stresses the importance of ensuring accountability for human rights violations committed in the Democratic Republic of the Congo (DRC) during the 2011 electoral period so as to prevent such crimes from being repeated during the next elections.

The report, produced by the UN Joint Human Rights Office (UNJHRO), calls for measures to be taken to ensure that the local, provincial and national elections – due to take place between 2014 and 2016 – will take place “in an environment conducive to the respect for human rights,” according to a news release.

The UN recalled that the November 2011 elections in the DRC were marked by “a large number of acts of violence” between members of political parties in almost all of the provinces of the vast African nation.

In addition to acts of violence committed by civilians against other civilians, “serious” human rights violations were perpetrated by the defense and security forces, it stated. The UN registered 345 violations committed during the 2011 electoral period, affecting at least 769 victims, including the deaths of at least 41 individuals.

“The defense and security forces were responsible for more than half of the registered violations and the most serious violations were committed in Kinshasa and in Kasai Oriental province,” the Office noted.

UN High Commissioner for Human Rights Navi Pillay stressed the need to expedite investigations leading to the criminal prosecution of perpetrators suspected of all human rights violations committed in the context of the elections and reiterated the importance of the fight against impunity for the stabilization of the DRC.

“I welcome all measures aimed at ending impunity. Unfortunately, the efforts made by Congolese authorities to address the human rights violations committed during the 2011 electoral period have not yet produced results. Impunity for the perpetrators of these human rights violations prevails even now, two years after the elections were held,” she said.

Ms. Pillay voiced particular concern about violations reportedly committed by security forces against supporters of political parties. “Every threat, every act of violence, every arbitrary arrest of an opponent by the authorities constitutes a serious setback, not only for the protection of human rights in the DRC, but also for reconciliation for Congolese society.”

The report recommends that Congolese authorities carry out independent, credible and impartial investigations into the violations and bring the alleged perpetrators to justice, regardless of their rank or position. It also calls for disciplinary measures against State officials and agents who have abused their privileges for partisan reasons, and for the authorities to firmly condemn incitement to violence and racial hatred.

Martin Kobler, the Secretary-General’s Special Representative and head of the UN peacekeeping mission in DRC (MONUSCO), called on the Congolese Government to take advantage of the recommendations of the report, notably with regard to the next electoral cycle, and to take all necessary preventive measures to ensure the smooth and peaceful holding of the next set of polls.

“We call on the Congolese authorities and their international partners to work towards the effective implementation of the recommendations made in the report, particularly with regard to the fight against impunity, and to provide appropriate support and training to the civil, military and police authorities.”

Established in February 2008, the UNJHRO comprises the Human Rights Division of MONUSCO and the Office of the High Commissioner for Human Rights (OHCHR) in the DRC. 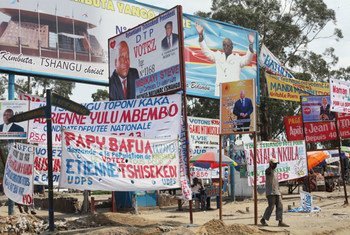 20 March 2012
Serious human rights violations, including killings, disappearances and arbitrary detentions, were committed by Congolese and security forces during last year’s presidential and legislative elections in the Democratic Republic of the Congo (DRC), according to a United Nations report released today.