More than $450 million was pledged between investors, green businesses, Governments and other parties at the United Nations-organized Global South-South Development Expo in Nairobi, where hundreds of participants spent this week exchanging ideas, solutions and technologies developed in the global South.

South-South cooperation is the exchange of resources, technology and knowledge between developing countries. Today, over $5 trillion in reserves are held by countries of the global South, which now also account for 47 per cent of global trade.

Among the agreements made this week at the 2013 Expo, held at the Nairobi headquarters of the UN Environment Programme (UNEP), were projects ranging from building organic fertilizer factories and clean energy projects in Kenya to solar power plants in Uganda to green businesses for women in Egypt.

Organized by the UN Office of South-South Cooperation and hosted by UNEP under the theme “Building inclusive green economies,” the Expo is the world's biggest stage for development solutions created in the South for the South.

“The theme of this year's Expo is fitting in that Southern countries have both the opportunity and the obligation to pursue a 'smarter' development course than their predecessors,” said General Assembly President John Ashe, who addressed today's closing ceremony.

He added that it is evident that South-South cooperation is having great impact and influence across a range of sectors including health, energy, economic and trade. It is also worthy, he said, to note that the South is attracting significant capital inflows, and that some of the emerging economies of the South are beginning to exercise tremendous geopolitical influence.

“The fact that this Expo is being convened in the Global South for the first time is testimony to the growing importance of the South.”

Mr. Ashe went on to say that this year's theme recognizes the fact that society, economy and environment are inextricably linked, and that each derives benefit from or causes harm to the other.

“It also highlights the concept that ecology and economy are not two competing and mutually exclusive paradigms, but that they can in fact be harmoniously managed in a mutually advantageous way for the benefit of companies, citizens, communities and countries,” he stated.

Highlights of the week included the Expo's first Solution Exchange Forum, which presented examples of innovative projects in developing countries that are already contributing tangible benefits to the environment, economic development and decent job creation.

A total of 15 Partnership Forums were also held, with topics ranging from youth volunteerism to China-Africa business in support of green growth. More than 50 exhibitors showcased their innovative Southern-grown solutions in the Expo's eco-friendly pavilion.

Also, more than 40 companies were successfully matched and held business negotiations at the Expo's South-South Global Assets and Technology Exchange (SS-GATE), another of the many events held during the week, which also featured the presentation of the annual South-South Cooperation Awards honouring individuals and organizations that have been prominent champions of South-South cooperation throughout the world.

The Expo topped the agenda in a meeting held today between Mr. Ashe and Achim Steiner, UN Under-Secretary-General and UNEP Executive Director.

They also discussed the green economy in the context of sustainable development and the Post-2015 Development Agenda, and the Third International Conference on Small Island Developing States (SIDS).

Mr. Ashe also met with Madame Sahle-Work Zewde, Director-General of the UN Office at Nairobi (UNON) to discuss the administrative services and political mandate of what is the third largest UN administrative office in the world.

The meeting comes as the General Assembly considers the Organization's budget for the next biennium.

While in Nairobi, Mr. Ashe also met with Doug Cress, Programme Coordinator of the Great Apes Survival Partnerships (GRASP), who urged the UN General Assembly to support the cause of great apes survival.

Among the topics discussed, the need to balance conservation and human growth, and the importance of technology and finance to help further this cause.

According to a UN spokesperson, Mr. Cress has proposed efforts to establish a UN International Day on Great Apes by 2014.

♦ Receive daily updates directly in your inbox - Subscribe here to a topic.
♦ Download the UN News app for your iOS or Android devices.
green 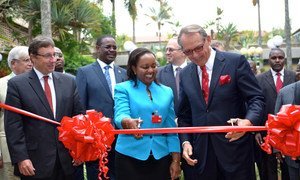 Representatives from some 150 countries today gathered at the headquarters of the United Nations Environment Programme (UNEP) in Nairobi, Kenya, to tackle development challenges and discuss ways to harness environmentally-friendly solutions developed in the global South.