Representatives from some 150 countries today gathered at the headquarters of the United Nations Environment Programme (UNEP) in Nairobi, Kenya, to tackle development challenges and discuss ways to harness environmentally-friendly solutions developed in the global South.

“The transition to inclusive green economies is essential to the economic and social development of countries all over the world,” said UNEP Executive Director Achim Steiner. “However, no one nation, community or agency has all the answers.

“This is why so many inspirational initiatives have gathered at this Expo – a mirror to the collective creativity of nations, cities, companies and citizens – to galvanize action that will place the global South on the pathway to a sustainable, low-carbon, green future.”

During the Expo, which was organized by the UN Office of South-South Cooperation and hosted by UNEP, delegates will be able to attend and participate in forums and roundtables which seek to highlight successful South-South initiatives and experiences that are benefiting the environment, economic development and job creation. They will also explore the role that this type of collaboration will have in the years beyond 2015.

Other topics to be discussed in the 16 partnership forums include green growth, business between China and Africa, youth volunteerism and the role of oil and gas in the transition to a green economy.

South-South cooperation is the exchange of resources, technology and knowledge between developing countries. Today, over $5 trillion in reserves are held by countries of the global South, which now also account for 47 per cent of global trade.

Also in attendance was Vice-President of the High-Level Committee of the UN General Assembly on South-South Cooperation and Deputy Permanent Representative of Hungary to the UN Zsolt Hetesy.

“This expo is a concrete expression of the partnerships we need for the path we seek,” he said.

“Over the past three decades the Global South has witnessed unprecedented growth and expansion of incomes, bolstering of trade, lifting of hundreds of millions from poverty and emergence of a growing middle class,” said Mr. Hetesy. “Much, in this unfolding phenomenon stems from a very noticeable surge in the practice and advancement of South-South cooperation by Member States, organizations of the United Nations system, other intergovernmental and non-governmental organizations, and other stakeholders.”

♦ Receive daily updates directly in your inbox - Subscribe here to a topic.
♦ Download the UN News app for your iOS or Android devices.
green|economy 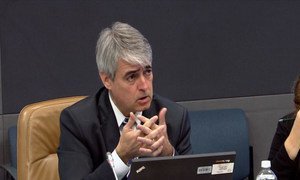 Countries must adopt new economic policies to adjust to structural changes in the world economy sparked by the onset of the global financial crisis five years ago, according to a new United Nations report.