Human rights defenders who oppose large-scale development projects are increasingly being branded as ‘anti-government’ or ‘enemies of the State,’ a United Nations independent expert warned today.

Human rights defenders who oppose large-scale development projects are increasingly being branded as ‘anti-government’ or ‘enemies of the State,’ a United Nations independent expert warned today.

Activists who are trying to help communities affected by large-scale projects such as the construction of hydroelectric power stations, dams and roads are often “harassed, stigmatized and criminalized for doing their work,” the Special Rapporteur on human rights defenders, Margaret Sekaggya, said in her latest report to the General Assembly.

They also face threats, including deaths threats, and physical attacks. “But rather than being against development, defenders play an important role in advancing it,” Ms. Sekaggya said.

“It is essential that communities and those defending their rights are able to participate actively, freely and meaningfully in assessment and analysis, project design and planning, implementation, monitoring and evaluation of development projects.”

Ms. Sekaggya called for a rights-based approach that includes the principles of equality and non-discrimination, participation, protection, transparency and accountability, including access to appropriate remedy.

Inclusion and participation, as well as accessible information about large-scale development projects, can contribute significantly to defusing tensions, she added. In contrast, a lack of transparency could not only increase the vulnerability of defenders and the affected communities, but also seriously undermine the credibility and legitimacy of both State and private involvement in such projects.

“States have an obligation to provide protection to those claiming their legitimate right to participate in decision-making processes and voicing their opposition to large-scale development projects,” she said. “It is essential that those who wish to report human rights concerns and violations can safely do so.” 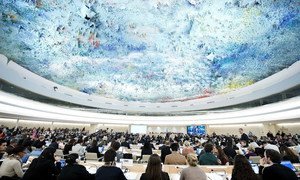 United Nations independent experts today voiced serious concern over reports that Chinese activists have been intimidated and prevented from taking part in a major assessment of the human rights situation in the country.