Jean-Marc Ferré
A general view of the Human Rights Council in session.

16 October 2013
United Nations independent experts today voiced serious concern over reports that Chinese activists have been intimidated and prevented from taking part in a major assessment of the human rights situation in the country.

“Intimidating civil society members who seek to contribute to such an important international dialogue is completely unacceptable,” said the Geneva-based experts in a news release. “Ensuring the free participation of civil society actors, including human rights defenders, and other national stakeholders, in this process is crucial.”

Activists have reportedly been threatened, arrested or banned from leaving China in the run-up to the second assessment of the country’s record by the UN Human Rights Council through its Universal Periodic Review (UPR) mechanism. The review will take place on 22 October 2013 in Geneva.

“These cases seem part of a pattern of increased harassment by China of those calling for greater accountability of public officials, transparency and political and legal reforms,” the experts said.

The experts received information that rights defenders Cao Shunli and Chen Jianfang were allegedly prevented from boarding flights to Geneva where they were due to participate in activities organized on the margins of a Human Rights Council session in September.

Chen Jianfang was reportedly told that she was barred from travelling abroad for life, while Cao Shunli was detained by Chinese security authorities on 14 September. Cao Shunli’s family has allegedly not received any formal notification of her detention.

It was also reported that Chinese civil society activists, who have been demonstrating since June to defend their right to participate and receive information on China’s report to the UPR, have been threatened by local authorities on various occasions.

“These reports suggest there have been acts of reprisals against people who seek to cooperate with the UN,” said Special Rapporteur on human rights defenders Margaret Sekaggya.

“Defenders play a key role in holding States to account for the implementation of their human rights obligations, including at the international level. Their legitimate work should be fully respected.”

China accepted recommendations made during its first review in 2009 to strengthen its engagement with civil society to promote and protect human rights. The Government informed the UN experts that non-governmental organizations were consulted ahead of the UPR session and that the draft of the national report was available on its official website for comments.

Special Rapporteur on freedom of opinion and expression, Frank La Rue, said that even if some organizations had participated in the UPR preparations, “nothing can justify excluding legitimate voices through intimidation.”

“Access to information and an open space for the free exchange of opinions and ideas are essential to ensure a proper review of the human rights record of any country,” Mr. La Rue stressed.

“This obligation includes facilitating peaceful protests by providing protestors with access to public space, and protecting them, where necessary, against any threats,” he said.

Regarding the situation of Ms. Cao, the Working Group on enforced or involuntary disappearances underlined that information on her detention, including the reasons and place of detention, should be made immediately available to her family members and counsel.

The experts have also asked the Chinese authorities for further information regarding these allegations and called for the immediate release of all those detained after peacefully protesting for more civil society participation in the UPR process and advocating for human rights and good governance.

“These serious allegations must be investigated thoroughly and impartially by the Chinese authorities,” the experts concluded. 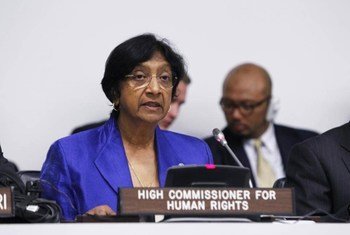 2 November 2012
The United Nations human rights chief today urged China to address the allegations of rights violations in Tibet, which have led to an alarming escalation of “desperate” forms of protest in the region, including self-immolations.