An independent United Nations expert has joined regional partners today in urging governments to stop reprisals against individuals and groups seeking to cooperate with UN and regional human rights mechanisms.

“Reprisals have to cease immediately and credible investigations into pending cases of reprisals have to be carried out,” said Margaret Sekaggya, the UN Special Rapporteur on the situation of human rights defenders; Reine Alapini-Gansou of the African Commission on Human and Peoples’ Rights ACHPR); and José de Jesús Orozco of the Inter-American Commission on Human Rights (IACHR), in a joint statement.

They also called on States to ease civil society’s access to the UN and regional human rights institutions.

The experts said that reprisals against individuals or groups engaging directly with the UN and the regional human rights systems took the form of smear campaigns, harassment, intimidation, direct threats, physical attacks and killings.

In an effort to safeguard collaboration between civil society and the UN and regional human rights mechanisms, the three experts called for enhanced monitoring and action to ensure respect of UN, ACHPR and IACHR normative agreements and rules of procedure prohibiting acts of reprisals by States and non-state actors.

“Such steps towards full accountability for reprisals are an important preventive measure that should be combined with those that facilitate, rather than deter, civil society’s safe and unimpeded access to the UN and the regional human rights institutions,” they stressed.

They also called on governments to immediately put an end to harassment and intimidation of individuals and groups attending the ongoing session of the UN Human Rights Council in Geneva. 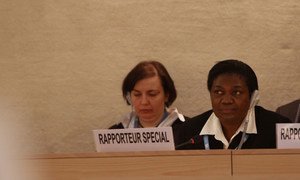 Human rights defenders continue to be harassed, attacked, killed and ‘disappeared’ around the world more than a decade after the adoption of an international declaration meant to protect them, a United Nations expert warned today.