28 October 2013
There can be no democracy without freedom of opinion, a United Nations independent expert said today, highlighting the importance of access to information as he also presented his ideas on making the main bodies of the UN – the General Assembly and the Security Council – more democratic.

“You should not be subjected to the pressures, the intimidation, whether by Government or by the private sector, which would force you into self-censorship,” Alfred M. de Zayas, Independent Expert on the promotion of a democratic and equitable international order, told the UN News Centre following a briefing to journalists in New York.

Earlier in the day, Mr. de Zayas spoke to the General Assembly’s main social, humanitarian and cultural body (Third Committee), to which he presented 35 recommendations on international and national diplomacy, as well as studies to be carried out ranging from self-determination to issues related to indigenous peoples, war and peace and civil society.

“One of the problems that we have in the human rights community is that special interests often forget the interests of other victims, and there’s competition among victims expressions that are unnecessary,” he said, adding also that some victims are viewed as being “privileged” while others are more “excluded.”

“The UN system is not very democratic, everyone knows that the Security Council is not democratic,” said the independent expert.

Speaking following a press conference heavily attended by representatives of indigenous groups, Mr. de Zayas said he wanted to show a “degree of solidarity” them.

He urged a workshop to be held which would focus on implementation of the Declaration on the Rights of Indigenous Peoples whom he called “the forgotten victims” and “the unsung heroes.”

“You cannot turn the clock back, you cannot give the island of Manhattan back to the indigenous, but on the other hand, you can ensure that the indigenous can maintain their way of life,” Mr. de Zayas said.

He also called for the media to take up the issue and inform the public about the Declaration. 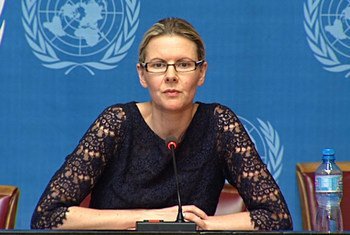 22 October 2013
The United Nations human rights office today called for the immediate release of a well-known Qatari poet who it says was harshly sentenced for a poem considered to be encouraging the overthrow of the ruling system of the country.