28 October 2013
Justice, security and development cannot be promoted one at the expense of the other, either through reductionism or strict sequencing, a United Nations independent expert today urged following his briefing to the General Assembly.

Pablo de Greiff, Special Rapporteur on the promotion of truth, justice, reparation and guarantees of non-recurrence spoke to journalists in New York after briefing the General Assembly’s main social, humanitarian and cultural body (Third Committee) on his work.

“An interest in justice and rights is part of popular aspirations that ought to be captured by ongoing development discussions,” Mr. de Greiff said, telling the international community and particularly those involved in creating a sustainable development agenda following the 2015 deadline for the Millennium Development Goals (MDGs), about the relevance of justice and rights.

Referring to his report, the Special Rapporteur said that the MDGs and other development frameworks have failed to track either existing legal obligations or popular aspirations related to justice.

He highlighted the importance of transitional justice measures as mitigating some of these developmental blockages, in particular if a comprehensive approach is pursued.

“Human rights violations, when left unaddressed can have an effect in creating a downward shift in people’s expectations,” he said, adding that people will shift their preferences downward rather than live in a permanent state of defeated expectations.

The UN independent expert also said that massive human rights violations undermine social trust and civic participation by having a marginalizing effect not just on the victims but on other members of society, undermining their trust in trust in each other and in the institutions of the State.

Any new development agenda must satisfy a sort of “Tunisia test”, the Special Rapporteur said, which also stress good governance and equitable access to justice systems.

“Even from the point of view of security and development, failing to take justice seriously makes it more difficult for security forces to achieve their proper goal,” he said. 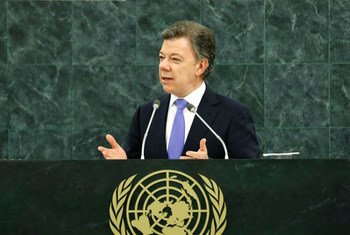 24 September 2013
Stressing the need to ensure justice as well as peace and stability in the wake of long-term conflict, the President of Colombia told the United Nations General Assembly today that transitional recovery efforts must include clear strategies to secure “the best possible satisfaction of the rights of all victims.”