“Lang Lang is one of the most exciting and accomplished musicians of our time. He has performed for world leaders and worked with some of the greatest orchestras and maestros,” Mr. Ban said. “But he has also used his art and ability to inspire audiences to improve the lives of children everywhere.”

Mr. Lang, who began playing the piano at age three, has performed around the world. He played at the opening ceremony of the 2008 Summer Olympics in Beijing, the 2009 Nobel Peace Prize ceremony for United States President Barack Obama and the Diamond Jubilee Concert for Queen Elizabeth of the United Kingdom at Buckingham Palace in 2012.

He has also been Goodwill Ambassador for the UN Children’s Fund (UNICEF) for the past 10 years, helping raise awareness to ensure every child’s right to quality health care and education. In addition, he has frequently used his music to raise funds for UNICEF and for humanitarian aid in emergencies, such as a special performance for a sold-out audience at Carnegie Hall in New York to benefit the UNICEF emergency response to the earthquake in Haiti.

“As Goodwill Ambassador for UNICEF, you have used your unique ability to inspire audiences around the world to help improve the lives of children,” Mr. Ban told Mr. Lang. “I am pleased that you will now be promoting global education, a key driver of human progress and well-being. I look forward to working with you to advance my Global Education First Initiative.”

The Global Education First Initiative focuses on three goals: getting every child in school; improving the quality of learning; and fostering global citizenship.

“Through his playful spirit and profound talent, Lang Lang connects people, not only through his music, but also through his passion to build a better world through education. I know Lang Lang’s message will strike a chord from symphony halls to school halls,” Mr. Ban said.

Messengers of Peace are individuals who possess widely recognized talents in the fields of art, film, literature, music and sports, helping to raise worldwide awareness of the UN’s ideals and activities. Through their public appearances, contacts with the international media and humanitarian work, they expand public understanding of how the UN helps to improve the lives of people everywhere. 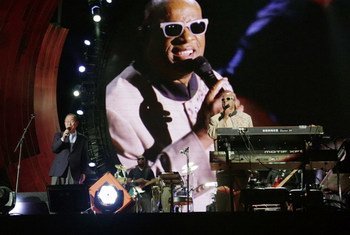