The United Nations Security Council today called urgently on the Governments of Sudan and South Sudan to refrain from any unilateral action that could heighten tension between the two neighbouring countries or impede a solution regarding the contested, oil-rich border region of Abyei.

The Council members reiterated “their grave concern about the highly volatile situation in Abyei area,” according to a press statement read by Agshin Mehdiyev, the Permanent Representative from Azerbaijan, which holds this month’s rotating presidency of the Council.

The statement follows a meeting between Presidents Omar al-Bashir of Sudan and South Sudan’s Salva Kiir on 22 October in the latter’s capital of Juba.

During the meeting, which Secretary-General Ban Ki-moon had welcomed, the two Presidents expressed intent to expedite the establishment of the Abyei Administration, Abyei Council and Abyei Police Service.

The AUHIP brokered a package of propels between the two sides that included topics on security, the common border and economic relations aimed at enabling the two nations to fulfil their obligations under a so-called roadmap for easing tensions, facilitating the resumption of negotiations on post-secession relations and normalizing the relations between the two countries.

Mr. Mehdiyev also expressed the Council’s support for an African Union delegation visit to Abyei on 26 and 27 October as an “opportunity to ease tension” in the region.

The question of Abyei is one of the remaining disputes between the two countries following the 2005 peace agreement which ended more than two decades of civil war, and led to a referendum which overwhelmingly supported South Sudan seceding from the rest of the country. 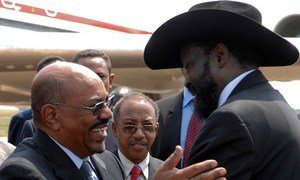 United Nations Secretary-General Ban Ki-moon welcomed the meeting today between the Presidents of South Sudan and Sudan, at which the two leaders discussed the contested border region of Abyei.