24 October 2013
A United Nations expert today urged the international community to focus on the human rights situation in Eritrea which she said is extremely concerning with the most serious violations being committed and with up to 3,000 people flee every month, many of them unaccompanied children.

“The current human rights picture is desperately bleak. People feel trapped in a long hopeless situation as they see no end to it to the point that they take the irreversible decision to flee, forcing them on the road to exile,” the UN Special Rapporteur on Eritrea, Sheila B. Keetharuth, told journalists in New York.

In her briefing to the Committee, the first since she took up the post on 1 November 2012, Ms. Keetharuth described an alarming situation on the ground pieced from interviews with Eritreans residing outside the country who have been victims of abuse, as well as with representatives in Djibouti and Ethiopia where Ms. Keetharuth was able to have official visits.

A full version of the report was submitted this past summer to the Geneva-based UN Human Rights Council, which appointed Ms. Keetharuth to examine and report back, in an unpaid capacity, on specific human rights themes.

In particular, the Special Rapporteur highlighted the excessive militarization affecting the very fabric of Eritrean society and the family, with men and women conscripted for unlimited periods of time instead of the prior 18 months of service with the National Service.

She told journalists about one teacher with whom she spoke who told her he wanted to put down the gun forced onto him, “I want to hold a pen in one hand and a book in the other.”

Ms. Keetharuth also raised the issue of incommunicado detentions which “appears to be the norm and not the exception.”

These and other human rights violations are “triggering a constant stream of refugees to neighbouring countries,” the independent expert said.

According to the UN Refugee Agency (UNHCR), 305,723 people last year fled Eritrea, with between 2,000 and 3,000 leaving the country every month, among them a large number of children unaccompanied by parents or guardians.

“All Eritreans should be able to claim and enjoy their human rights, be it civil and political or economic, social and cultural,” she said. “This will require innovative ideas to address those issues perceived by Eritrea as hostile and constructive engagement with Eritrea and neighbouring countries to improve the situation of human rights in the country.”

The desperation of the people in Eritrea, despite a shoot-to-kill policy targeting those attempting to flee, is further apparent in the two successive boat tragedies off the coasts of Italy and Malta earlier in October, during which more than 350 refugees lost their lives, including many Eritreans, she said.

She called on the international community to focus on the human rights situation in Eritrea and increase efforts to protect refugees.

The Special Rapporteur also reiterated her call on the Eritrean Government to cooperate with her mandate which offers a “frank and open dialogue” on the theme of human rights.

UN panel pays out over $1.2 billion in reparations for Iraq’s 1990 invasion of Kuwait 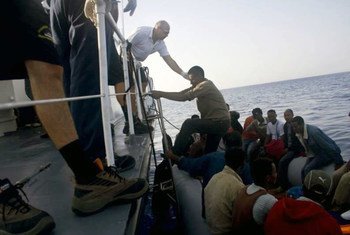 12 October 2013
Following reports of a second ship capsizing off the coast of the Italian island of Lampedusa, Secretary-General Ban Ki-moon today called on the international community to protect the rights of migrants and take action to prevent such tragic incidents.