United Nations human rights experts today urged a review of the universally accepted global principles and practices for the treatment of prisoners and management of penitentiary institutions, particularly decrying the use of solitary confinement.

“It is very important to prohibit solitary confinement to some categories under no circumstances, like minors, people with mental disability, women – especially pregnant or feeding babies,” Juan E. Méndez, Special Rapporteur on torture, cruel, inhuman or degrading treatment or punishment, told journalists in New York.

Mr. Méndez, who is among the independent experts at the UN Headquarters this month to brief the General Assembly’s main social, humanitarian and cultural body (Third Committee), added that even for people who do not fall within these categories, solitary confinement should never be indefinite and never prolonged.

The Special Rapporteur also emphasized the need to extend the application of the UN Standard Minimum Rules for the Treatment of Prisoners to all places of deprivation of liberty, including mental hospitals and police stations.

“It is rather obvious that unless the Rules are revised, to adequately reflect the recent advances in international law and best practices, it is unlikely that penitentiary staff will look beyond what the current Rules require,” he underscored in a news release ahead of the briefing.

He insisted that the Rules must contain guidelines for the proper, independent and impartial investigation of all incidents of torture or cruel, inhuman and degrading treatment in detention centres.

In his briefing to the media, Mr. Méndez also highlighted standards for the investigation of every allegation of torture and cruel and degrading treatment.

“The debate today shows what the standard should include after the review is widely shared and it’s no longer a matter for specialists, but it will in all likelihood include a concern for the human rights of people who are deprived of freedom,” the Special Rapporteur said.

He added that he plans to visit Mexico, Thailand and possibly Georgia, in 2014, but also noted difficulty in trying to schedule visits to Bahrain, Guatemala and the United States, where he has asked to visit prisons in California, Colorado, New York, and Pennsylvania.

Also addressing the media, Claudio Grossman, Chair of the UN Committee against Torture, who noted that only 154 of the 193 Member States have ratified the Convention against Torture.

Journalists also heard from Malcolm Evans, Chair of Subcommittee on the Prevention of Torture (SPT), the largest of the UN human rights treaty body. 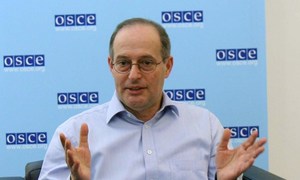