The head of the United Nations Food and Agriculture Organization (FAO) today called for innovative thinking to measure and cut global food loss and waste which he said is essential to advance the fight to eliminate hunger.

FAO Director-General José Graziano da Silva told participants at the Global Green Growth Forum (3GF) in Copenhagen that an estimated one-third of all food produced for human consumption is lost or wasted – around 1.3 billion tons. This costs around $750 billion annually.

“If we reduce food loss and waste to zero it would give us additional food to feed 2 billion people,” said Mr. Graziano da Silva, who joined leaders of partner agencies to discuss plans for a new global standard for measuring food loss and waste announced at 3GF by the World Resources Institute (WRI).

“One of my priorities in FAO is opening our doors to potential allies. Fighting food loss and waste is clearly one area in which partnership is needed. Developing a global protocol can help provide clear measurements and indicators on which we can base guidance on how to reduce food loss and waste,” he stated.

FAO noted that most food loss takes place in post-production, harvesting, transportation and storage. In developing countries, food waste is mainly related to inadequate infrastructure, while in more developed countries it is largely a problem in the marketing and consumption stages.

“We already know a lot about how to cut food losses,” said the Director-General. “But we need to invest more in a number of areas, especially in infrastructure such as roads and cold chains, but also improving market information. We also need to close the gap between the knowledge we have and what farmers and other actors in the food chain are actually doing.”

He called for more “innovative thinking” to keep retailers and individual households from throwing food away. Per capita consumer waste is around 100 kilograms in Europe and North America per year. In Africa, it is less than 10 kilograms a year per person.

FAO works on numerous initiatives to reduce the loss of food in the agricultural process and throughout the food system ‘from field to fork.’

It launched the SAVE FOOD initiative together with the UN Environment Programme (UNEP) and Messe Dusseldorf to reduce food loss and waste along the entire chain of food production and consumption.

It also collaborates with UNEP, WRAP (Waste and Resources Action Programme) and other partners in the Think.Eat.Save. campaign designed to target and change wasteful practices, especially at the retail and consumer end of the food-supply chain.

♦ Receive daily updates directly in your inbox - Subscribe here to a topic.
♦ Download the UN News app for your iOS or Android devices.
Food Waste 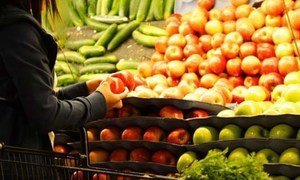