The report, Food Wastage Footprint: Impacts on Natural Resources, is the first study to analyze the impacts of global food wastage from an environmental perspective, looking specifically at its consequences for the climate, water and land use, and biodiversity.

One of the key findings of the report is that food that is produced but not eaten each year guzzles up a volume of water equivalent to the annual flow of Russia’s Volga River and is responsible for adding 3.3 billion tonnes of greenhouse gases to the planet’s atmosphere. Similarly, 1.4 billion hectares of land – 28 per cent of the world’s agricultural area – is used annually to produce food that is lost or wasted.

Beyond the environmental impacts, food wastage costs some $750 billion annually to food producers.

“All of us – farmers and fishers; food processors and supermarkets; local and national governments; individual consumers – must make changes at every link of the human food chain to prevent food wastage from happening in the first place, and re-use or recycle it when we can’t,” said the Director-General of the Food and Agriculture Organization (FAO) José Graziano da Silva.

“We simply cannot allow one-third of all the food we produce to go to waste or be lost because of inappropriate practices, when 870 million people go hungry every day.”

The report points out specific features of food waste according to regions. For example, cereal waste – particularly that of rice – is a big problem in Asia, with major impacts on carbon emissions and water and land use.

Fruit wastage contributes significantly to water waste in Asia, Latin America, and Europe, while large volumes of vegetable wastage in industrialized Asia, Europe, and South and South East Asia translates into a large carbon footprint for that sector. Excluding Latin America, high-income regions are responsible for about 67 per cent of all meat waste.

As a companion to its report, FAO has also published a comprehensive ‘tool-kit’ with recommendations on how food loss and waste can be reduced at every stage of the food chain. The tool-kit gives examples of projects around the world that show how national and local governments, farmers, businesses, and individual consumers can take steps to tackle the problem.

“Today’s excellent report by FAO underlines the multiple benefits that can be realized – in many cases through simple and thoughtful measures by for example households, retailers, restaurants, schools and businesses – that can contribute to environmental sustainability, economic improvements, food security and the realization of the UN Secretary General’s Zero Hunger Challenge,” said the Executive Director of the UN Environment Programme (UNEP), Achim Steiner, while urging countries to join the agencies’ joint campaign to stem food waste ‘Think Eat Save - Reduce Your Foodprint!’ 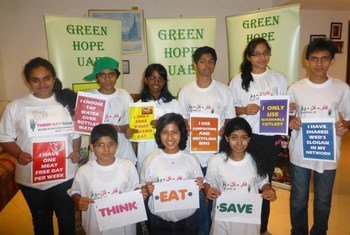 5 June 2013
With tons of edible produce squandered each year – never making it from farm to fork – senior United Nations officials are issuing a call on World Environment Day to “reduce your foodprint!,” urging everyone to help curb the massive loss and waste inherent in today’s food systems.