Citing the negative impact of the inter-communal clashes in Myanmar’s Rakhine state on children in the region, the United Nations Children’s Fund (UNICEF) today urged all parties to put an end to the violence.

“In the name of Myanmar’s children, now is the time for this violence to end,” said Bertrand Bainvel, UNICEF Representative in Yangon. “Hate messages and inflammatory propaganda just perpetuate the cycle of violence, and it is children who suffer.”

Rakhine state has been the site of inter-communal violence since June 2012, with clashes between ethnic Rakhine Buddhists and Rohingya Muslims, which eventually led the Government to declare a state of emergency there. Some 75,000 people were uprooted in the first wave of riots and another 36,000 were displaced by a second wave of unrest in October last year.

The latest wave of violence broke out on 29 September in the southern town of Thandwe. Initial reports soon after suggested that the fighting had been brought under control, but later reports stated that hostilities recommenced on 1 October and subsequently spread to Tha Byu Chaing, Pauk Taw, Shwe Hlay and Me Kyun townships. Deaths have been reported, along with the destruction of some 110 homes.

The violence has also caused a new wave of displacement of families and added to the fears of those displaced last year.

“When violence drives people from their homes, children who are displaced and those in the host communities suffer,” said Mr. Bainvel. “Displacement puts children at greater risk of family separation and domestic violence, they miss out on schooling and too frequently they experience physical and emotional damage.”

UNICEF is also concerned that the polarization resulting from ongoing inter-communal violence could stall or put at risk the many important reform processes currently underway in Myanmar, with negative repercussions for all of Myanmar’s children.

“Peace-building and reconciliation activities must be prioritized if Myanmar’s children are to have the future they deserve, and to which they have a right,” Mr. Bainvel said. 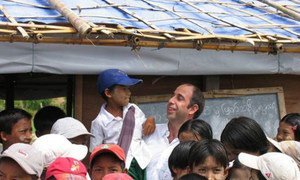 A United Nations independent expert today urged greater inclusion of women and other minority voices in the peace efforts in Myanmar and called on the Government to fulfil its obligations in stemming the spread of incitement of religious hatred directed against minority communities.