OCHA
Overcrowding at the main evacuation centre in the coastal province of Zamboanga, Philippines, is causing increasing health risks and vulnerability for at least 70, 000 people.

8 October 2013
The United Nations emergency relief fund will allocate $3 million to assist people in southern Philippines where recent armed conflict has displaced communities, a situation worsened by torrential rains over the past few days.

“Conditions are overcrowded as people originally displaced by conflict who had returned home, are now returning to displacement sites as well as newly displaced flood victims,” the UN Office for the Coordination of Humanitarian Affairs (OCHA) said.

Over 117,000 people are now displaced in Zamboanga City and over 8,000 are displaced in the Basilan province, the UN relief arm added.

The living conditions of the displaced communities further deteriorated with flooding in displacement sites as a result of rains the past four days with strong winds destroying plastic sheeting used as emergency shelter.

“We carried out an assessment with the Office of Civil Defence and looked at the most immediate needs of the displaced people,” said the Resident and Humanitarian Coordinator, Luiza Carvalho.

“We are requesting $24 million for the overall humanitarian operation and the CERF funding gives us the resources to scale up the response to support Government line departments and local authorities,” Ms. Carvalho added referring to the UN Central Emergency Response Fund.

She urged the international community to address the remaining $21 million gap.

Managed by OCHA, the CERF is one of the world’s largest sources of humanitarian funding. The emergency funding was allocated to UN agencies and partners to enable them to provide life-saving assistance.

It will address the immediate needs of camp coordination and camp management; water, hygiene and sanitation; protection including child protection and gender-based violence; health including reproductive health; logistics; and food and non-food items such as cooking utensils.

“We have been working on the ground for a number of weeks now,” said Ms. Carvalho. “This visit has given me the opportunity to see the situation for myself and grasp the extent of the work ahead as well as the chance to witness the resilience of the affected communities, local authorities and NGO partners.”

This further heightens the communities’ burden and exposes them to the elements, which requires immediate and additional response from the authorities and humanitarian actors.

Earlier this month, armed clashes erupted between Government forces and non-State actors in Zamboanga City. Some 132 people have died as a result of the standoff and OCHA estimated that some 158,000 people have been affected by the violence and more than 10,000 homes have been destroyed.

The humanitarian response is expected to last for up to six months. 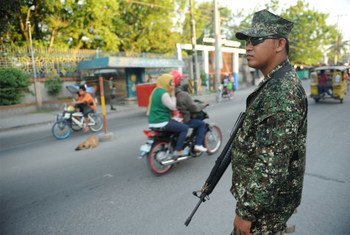 25 September 2013
The situation in Zamboanga City in the southern Philippines is now a humanitarian crisis, as tens of thousands of people remain forcibly displaced, the United Nations said today, calling for support to the victims of the recent wave of violence in the country.