General Assembly President John Ashe and Deputy Secretary-General Jan Eliasson spoke today with more than 1,100 civil society representatives about their priorities for global sustainable development in the years following the end of the current development cycle in 2015.

“Embarking on the post-2015 development agenda will require levels of collaboration among all stakeholders, the likes of which we have not seen before,” Mr. Ashe told thousands of participants gathered at the United Nations Headquarters in New York and those participating via webcast in 'Advancing Regional Recommendations on Post-2015: A Dialogue between Civil Society, Governments and UN Representatives'.

Urging a collective change in “business as usual,” Mr. Ashe called for the inclusion of sustainability into the way “we plan, live, do business and seek recreation.”

“This is the greatest challenge we face,” the General Assembly President said, “how to get absolutely everyone on board for the way in which we define, approach and implement the post-2015 development agenda.”

Today's Dialogue comes ahead of Wednesday's special General Assembly event to take stock of progress and renew commitment toward achieving by 2015 the eight anti-poverty targets known as the Millennium Development Goals (MDGs), and to lay the foundation for a sustainable agenda to follow.

To this end Mr. Ashe, has declared “The Post 2015 Development Agenda: Setting the Stage!” the theme for the 68th General Assembly.

At today's event - which also brought together Member States, regional actors and the UN - representatives of regional civil society networks presented their recommendations in Arabic, English, French and Spanish for a post-2015 agenda.

The event was organized by the UN Non-Governmental Liaison Service (UN-NGLS) in partnership with the Post-2015 Development Planning Team of the Executive Office of the Secretary-General (EOSG).

Earlier this month, the UN launched A Million Voices: The World We Want reflecting the long-term priorities of people around the world. The report is the result of 88 national consultations, 11 thematic dialogues and an online global survey, which were carried out over the past year.

Addressing participants at today's event, Mr. Eliasson said while the way the messages in the report were collected and incorporated into the multilateral decision-making process is new, the messages are grounded in the MDGs, reaffirming the importance of access to education, health, water and sanitation, and gender equality.

The second message, Mr. Eliasson said, is that people are angry about injustice and growing inequalities.

They also want their governments to do a better job in representing them – delivering key services and creating opportunities for their full and equal participation in decisions that affect them.

Mr. Eliasson recounted the story of a young woman with disabilities in Ecuador who said, 'Nothing for us without us'.”

He also stressed that people want to live without fear of violence or conflict, and are demanding that authorities safeguard the environment.

“The UN system will continue to do its utmost to ensure that the voices and ideas of people from all over the world are brought to the debate, making it a true 'we the peoples' process,” Mr. Eliasson said.

The Deputy added that both he and Secretary-General Ban Ki-moon see “great value” in expanding space for meaningful civil society participation throughout the UN system.

Mr. Eliasson also noted that consultations revealed an appetite not just for involvement in the design of the development agenda, but also in its future implementation.

“People are asking for transformation - not just of the 'what', but also the 'how' we do development,” he said.

Participants also heard from Minister Bathabile Dlamini from South Africa and Ireland's Joe Costello, who will act as facilitators at Wednesday's special event. 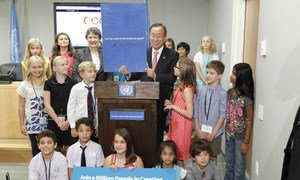 The voices of more than 1 million people all over the world were gathered to produce a United Nations report launched today that reflects their priorities concerning development issues, which will help Member States shape the post-2015 sustainability agenda.