The voices of more than 1 million people all over the world were gathered to produce a United Nations report launched today that reflects their priorities concerning development issues, which will help Member States shape the post-2015 sustainability agenda.

The report, A Million Voices: The World We Want is the result of 88 national consultations, 11 thematic dialogues and an online global survey, which were carried out over the past year. The report is meant to help Member States draft a successor framework to the anti-poverty targets known as the Millennium Development Goals (MDGs), which will expire in 2015.

“Our work to define a post-2015 development agenda will help us to recalibrate our efforts to eradicate extreme poverty and chart a course to a world of prosperity, peace, sustainability, equity and dignity for all,” Secretary-General Ban Ki-moon said at a press conference in New York.

“Many actors are involved. But the voices we need to hear from most are those of the people of the world, especially those that are usually unheard – particularly the excluded or marginalized – disabled persons, the poor and jobless, the hungry, those living without adequate sanitation or health care.”

Some of the key messages of the report include people’s desire to play a role in changing their world. While they agreed that the MDGs cover fundamental development areas that are still critically important, they also expressed the need to tackle inequality within and among countries.

“People are indignant at the injustice they feel because of growing inequalities and insecurities that exist particularly for poorer and marginalized people,” the report says, adding that they would like to see a new development agenda based on human rights and universal values of equality, justice and security.

“The people who participated in the global conversation conveyed the sense that the world as it is, is not fair to many and the want the post-2015 agenda to address and change that,” said the Administrator of the UN Development Programme Helen Clark. “So it is important that Member States, governments, hear the feedback from the consultations as they contemplate what the new development agenda should look like.”

“What came through very strongly was that everywhere people want their Governments to do a better job. To be honest and responsive in delivering services, create the conditions for decent work and citizen security and to take responsibility for the state of the planet and its ecosystems.”

The consultations were carried out by the UN Development Group, which unites 32 UN agencies and funds. More than one million people engaged in the consultation process, half of them under the age of 30, and the UN and its partners put emphasis on reaching the most vulnerable and marginalized groups so that their voices are heard. 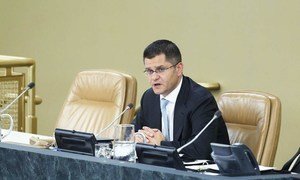 A United Nations top official today underlined that focusing on achieving sustainable development will be crucial for Member States if they want to succeed in reducing some of the world’s most pressing issues such as poverty, economic instability and social inequality.