Significant progress has been made in the two decades since the convening of a major global human rights conference in Vienna, but serious limitations remain on the full realization of these rights for millions worldwide, a top United Nations official said today, highlighting an upcoming event aimed at taking stock of the situation.

The World Conference on Human Rights, held in the Austrian capital in 1993, as well as its outcome – the Vienna Declaration and Programme of Action – marked the beginning of a renewed effort in the protection and promotion of human rights.

It was also at the Conference that Member States agreed to create the post of the UN High Commissioner for Human Rights, which is currently held by Navi Pillay.

To mark the 20th anniversary of the Vienna Conference, a high-level event will be convened in New York on 25 September, co-hosted by Ms. Pillay and Austrian President Heinz Fischer. Two previous High Commissioners, Louise Arbour and Mary Robinson, will also take part in the event, which takes place amid the annual high-level debate of the General Assembly.

“We think that this is a great opportunity to try to identify, 20 years after Vienna, what have we achieved and where we failed,” Assistant Secretary-General for Human Rights Ivan Šimonović told a news conference in New York.

“A lot has undoubtedly been achieved,” he noted, citing, among other achievements, a “stronger, more robust” human rights organizational framework, the creation of the Human Rights Council, the Universal Periodic Review by which every country’s record comes under scrutiny, and a “considerably strengthened” treaty body system.

“However, there are definitely a number of shortcomings,” he added, recalling atrocities that have occurred during the past decades in places such as Rwanda and Sri Lanka, among others.

Mr. Šimonović also noted that the human rights message has spread globally and created a lot of aspirations, as witnessed during the Arab Spring. “If human rights aspirations are not met, people all over the world will rebel.”

He added that the Arab Spring has also clearly shown that it is not enough to have democratic aspiration. “There is an urgent need for support to relevant institutional building and widening of democratic space. Obviously, free and fair elections are not enough to bring democracy.”

Also addressing reporters, Gerhard Doujak, Head of the Human Rights Department in the Austrian Federal Ministry of European and International Affairs, noted that the Vienna Conference came at a very important political moment and represented a paradigm shift.

“The time was right for the setting of new standards for the worldwide promotion and protection of human rights,” he told the news conference. “Twenty years later, the moment came for us to take a fresh look [at] the commitments we had taken 20 years ago.”

Both men urged heads of Government who will be present at the high-level event to set out a vision for the future of human rights action.

“It crystallized the principle that human rights are universal, indivisible, interdependent and interrelated, and firmly entrenched the notion of universality by committing States to the promotion and protection of all human rights for all people ‘regardless of their political, economic, and cultural systems’,” she had stated in June at a Vienna+20 conference held in the Austrian capital. 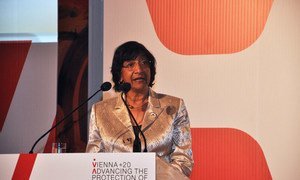 While there have been significant human rights achievements since the landmark adoption of the Vienna Declaration 20 years ago, people across the world are still being denied basic liberties, a United Nations senior official said today, calling on countries to step up their efforts to prevent gross rights violations.