16 September 2013
A United Nations team probing the possible use of chemical weapons in Syria has found “clear and convincing evidence” that Sarin gas was used in an incident that occurred on 21 August in the Ghouta area on the outskirts of Damascus in which hundreds of people were reportedly killed.

“The report makes for chilling reading,” Secretary-General Ban Ki-moon told reporters following a closed-door briefing to the Security Council on the team’s work, which concludes that on the basis of evidence obtained during its investigation, “chemical weapons have been used in the ongoing conflict between the parties in [Syria], also against civilians, including children, on a relatively large scale.”

The team, led by Swedish scientist Dr. Åke Sellström, also concludes in particular that the environmental, chemical and medical samples collected provide “clear and convincing evidence that surface-to-surface rockets containing the nerve agent Sarin were used in Ein Tarma, Moadamiyah, and Zamalka, in the Ghouta area of Damascus.”

“The results are overwhelming and indisputable. The facts speak for themselves. The United Nations Mission has now confirmed, unequivocally and objectively, that chemical weapons have been used in Syria,” declared Mr. Ban, underscoring that 85 per cent of blood samples from the sites in Ghouta tested positive for Sarin, and the majority of the rocket fragments were also found to be carrying the deadly nerve agent.

“This is a war crime,” the Secretary-General said, stressing that the incident marked the most serious chemical weapons incident since Saddam Hussein’s attack on the Halabja region of Iraq, and the worst use of weapons of mass destruction in the 21st century. “The international community has a responsibility to hold the perpetrators accountable and to ensure that chemical weapons never re-emerge as an instrument of warfare.”

The accession of Syria to the Chemical Weapons Convention and its belated acknowledgement that it possesses chemical weapons are welcome developments that come with strict obligations, the UN chief said.

Responding to questions, the Secretary-General said Dr. Sellström’s team had been able to determine objectively that Sarin was used on a relatively large scale. It was the team’s job to determine whether and to what extent chemical weapons were used, not who used them.

“It is for others to decide whether to pursue this matter further to determine responsibility. We may all have our own thoughts on this, but I would simply say that this was a grave crime and those responsible must be brought to justice as soon as possible,” he said.

Speaking during the closed-door Council session, the UN chief said the team had interviewed more than 50 survivors, medical personnel and first responders. It applied a rigorous and objective selection process designed to identify survivors who may have been exposed to chemical agents. It assessed these individuals’ symptoms and collected biomedical samples, including from hair, urine and blood.

The Mission also documented and sampled impact sites and munitions, and collected 30 soil and environmental samples – far more than any previous such UN investigation, he said.

“The statements by survivors offer a vivid account of the events of 21 August,” said the Secretary-General, noting that survivors reported that following an attack with shelling, they quickly experienced a range of symptoms, including shortness of breath, disorientation, eye irritation, blurred vision, nausea, vomiting and general weakness.

“Many eventually lost consciousness. First responders described seeing a large number of individuals lying on the ground, many of them dead or unconscious,” he said.

On related developments, Mr. Ban said that Russia and the United States, led by Foreign Minister Sergei Lavrov and Secretary of State John Kerry, held intensive consultations in Geneva last week, along with their experts. He welcomed the understanding they reached regarding the safeguarding and destruction of Syria’s chemical weapons stockpiles.

“I hope the Security Council and the Executive Council of the OPCW can move quickly to consider and implement this plan. I stand ready to support this plan in every way possible, while also fully realizing the complexities of such an undertaking in the midst of a civil war,” he said.

“The unity of the Security Council will be crucial. Given the gravity of the situation, I urge the Council to consider ways to ensure enforcement of, and compliance with, the plan through a clear resolution.”

Mr. Ban also said that the humanitarian situation in Syria is desperate. Food supplies are dangerously low in some places. “Families face intolerable choices between the risk of remaining in place and the risk of taking flight. Communities that once lived in relative harmony are now torn with sectarian tension.”

“We need to do everything we can to bring the parties to the negotiating table. This is the only path to a durable solution. I stand ready to convene the International Conference on Syria in Geneva as soon as possible,” he said, adding that he looked forward to meeting with Mr. Lavrov and Mr. Kerry on 28 September. He hoped the officials would be able to set a date for the conference at that time. 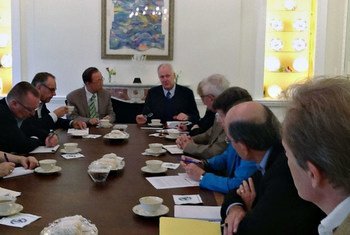 15 September 2013
United Nations Secretary-General Ban Ki-moon has today received the report of the UN team probing the possible use of chemical weapons in Syria and plans to brief the members of the Security Council on the findings in a closed-door session tomorrow.