16 September 2013
Two years after the fall of the authoritarian regime, Libya faces a number of challenges in ensuring that its democratic transition proceeds peacefully, a United Nations envoy told the Security Council today, noting that recent months have been marked by pronounced political disagreements, a disruption of the country’s oil exports, and security problems.

“It is more evident today that pre-conceived ideas about political transition are likely to be a recipe for disappointment, if not failure,” Tarek Mitri, the Secretary-General’s Special Representative and head of the UN Support Mission in Libya (UNSMIL), said in his briefing to the 15-member body.

“Free and fair elections may have augured a democratic process but they raised more expectations than what the political institutions and forces have been capable of meeting,” he stated.

“Today, there is a sense of skepticism, and perhaps of rejection, with which the Libyan people view the political process. But this should not be mistaken for a loss of faith in national unity, democracy and the rule of law. Their commitment to the principles for which they fought their revolution remains deep.”

Briefing on work of UNSMIL over the past six months, Mr. Mitri noted that a combination of internal and regional dynamics continues to place a huge strain on the political processes taking place in the country. This further compounds the difficult tasks facing the Libyan authorities as they strive to ensure that the country’s transition moves peacefully forward.

The last three months have witnessed “pronounced political disagreements” among the various political forces, he said. The main political blocs within the General National Congress decided, separately, to suspend their participation as organized political parties, in the work of national political institutions.

“Although partially reversed, these decisions were in large part a reaction to widespread popular discontent with political parties and reflected an accentuated polarization in public life.”

He also noted that the “recent and severe” disruption of the country’s oil exports, following protests at a number of terminals, has grave consequences for Libya’s economic stability.

“In a country where oil revenues account for approximately 80 per cent of Libya’s gross national product and 97 per cent of exports, the Libyan Government faces the dangerous prospect of not being able to meet its financial obligations unless a resolution to this crisis is reached imminently,” warned the envoy.

“We believe that the resolution of this crisis, as well as of the many others confronting Libya, through peaceful means is vital to the country’s national interest and its ability to make meaningful progress in its transition. In this context, we also urge all parties to desist from the manipulation of Libya’s resources for political ends.”

Mr. Mitri pointed out that security problems in Libya are still the predominant concern for the Libyan people. In addition, the situation of many of the estimated 8,000 conflict-related detainees remains “problematic,” with continued reports of deaths in custody, torture and other forms of ill-treatment.

At the same time, he reported that the Libyan constitution-making process has made some progress, with the adoption by the General National Congress of a law for the election of the Constitution Drafting Assembly.

Also, in response to the increasing demand across the political spectrum for a national dialogue that can address the country’s “faltering” transition, the Libyan authorities agreed on preparing and convening this dialogue.

“A national dialogue would provide a platform for engaging political, revolutionary, traditional and other actors in discussing urgent national issues and seeking consensus on strategies, as well as basic principles that ought to govern political life in the transitional period until the adoption of a new constitution and the holding of new elections,” said Mr. Mitri. 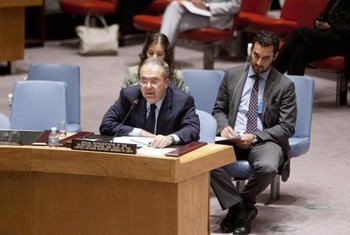 18 June 2013
Managing Libya’s democratic transition is bound to be difficult given the legacy of decades of brutal rule, a senior United Nations envoy told the Security Council today, adding that the country could benefit from a national political dialogue on the way forward.