12 September 2013
At this “crucial moment” for Syria and the wider Middle East, the President of the United Nations General Assembly today called on Member States to push for a diplomatic solution to the crisis by supporting efforts to bring all parties to the conflict to the negotiating table at a proposed conference in Geneva.

“What happens in Syria in the weeks ahead will profoundly bear upon the security and well-being of the entire region of the Middle East, and possibly the whole world,” said Vuk Jeremic.

“All our endeavours must be put in the service of bringing about the immediate unconditional cessation of hostilities, and inducing the conflicting parties to engage in dialogue.”

Mr. Jeremic emphasized his belief that the only way to end the bloodshed in Syria is through political dialogue, which can be achieved by getting all relevant parties to take part in the proposed international peace conference on Syria (Geneva II).

The goal of the conference would to be to achieve a political solution to the conflict through a comprehensive agreement between the Syrian Government and the opposition for the full implementation of the Geneva communiqué of 30 June 2012.

“I strongly urge Member States to act in furtherance of this goal. Continued militarization would only deepen the suffering of the people of Syria, and cause further radicalization of the conflict,” Mr. Jeremic said.

He also noted that if allegations regarding the use of chemical agents by a party to the conflict are proven accurate, Member States should unite and develop an appropriate response, in full respect of international law, including the centrality of the Security Council’s role under the UN Charter.

Meanwhile, the Joint Special Representative of the UN and the League of Arab States, Lakhdar Brahimi, has been working with other senior diplomats to bring the Geneva Conference to fruition. Today he met with United States Secretary of State John Kerry, who reiterated his commitment to the conference.

“We hope that once they have done what they have to do with the Russians on this chemical issue, we will start talking again about Geneva,” Mr. Brahimi said to reporters in the Swiss city.

The biomedical and environmental samples taken by the UN chemical weapons inspection team from the alleged 21 August attack in the Ghouta area outside Damascus are currently being analyzed in four European laboratories.

UN Secretary-General Ban Ki-moon has said that scientists are working “around the clock” to ensure a rapid result but one that also respects the highest professional standards and without compromising its integrity. 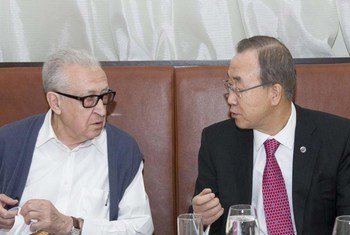 6 September 2013
The Joint Special Representative of the United Nations and the League of Arab States today stressed that he and other senior diplomats were working “extremely hard” bring Syrian an other concerned parties together for a conference to find a political path out of the crisis in the country.